I went to the cinema last night, and saw United 93 – the film about the fourth hijacked plane on September 11th, which was believed to have been headed to the White House or Congress before it crash-landed. 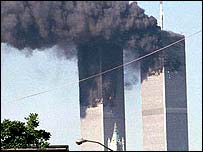 “9/11” is one of those days where everyone will remember where they were. I was in Slovenia, travelling through Eastern Europe with Niall. We were in a campsite just north of Ljubjana, the capital, and we heard the news unfold on the BBC World Service on the radio. Some days later when we moved to another campsite, we finally saw the TV pictures which had gripped the world since a few days before.

The film itself portrayed the emerging crisis as seen by the military and air traffic control authorities that morning, plus the hijack on the plane itself and the passengers fighting back.

It seems that quite a lot was known about what happened on board, through phonecalls made by passengers and the sounds air traffic control were able to pick up on, so perhaps this was as realistic a description of events as there could be. Indeed, according to the credits at the end, many of the military and air traffic control people were played by themselves.

Today, all hell continues to break loose in the war on terror which “9/11” unleashed, with warped religious fervour on all sides, and lives being destroyed in Iraq, Afghanistan and Israel/Palestine, all in the name of “God”, “freedom” and various other terms that no perpetrator has ever accurately defined.

A little reassuring to think, then, that on that fateful day when the passengers of the fourth plane conspired to fight back against the hijackers, and perhaps came close to succeeding, that the very best of human nature – love, courage and togetherness – could come out of a group of very ordinary people thrust into a situation they didn’t expect or understand.

A far cry from the characters pedalling this war, whether bearded rich men hiding in Afghan caves or half-brained megalomaniacs in Washington DC.