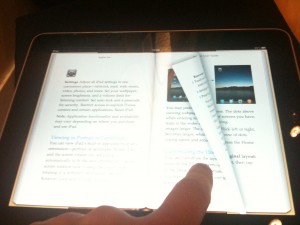 Justin was in town the other day, briefly, and I used a quick catch-up as a chance to play around with his new iPad.

The iPad was released to much gusto a wee while back, and – like many – I was not convinced.  The idea struck me as simply a large iPhone but without the phone.  Cumbersome, therefore, and not as functional.

Add to that the lack of multitasking, the fact that 3G was not free with it, and the expensive app store, and it really didn’t seem to be all that useful a piece of kit.

After having had a shot of Justin’s iPad, I remain of much the same opinion .

I will, however, say that it looks and feels brilliant.  The screen is great, with wonderful graphics on things like DVDs, the change of orientation from portrait to landscape is very nifty, the compass was great for games, and perhaps the biggest surprise was that it was not as big as I expected.

I feared something really quite unwieldy, which would lose some of the portability it was meant to rely on; but actually it was a perfect size – big enough for things like videos and games but small enough and light enough in the hand not to be too hard to hold or heavy to carry.

Word processing, though, something that would be a vital thing for me, was cumbersome, and tapping on a screen – as the iPhone proves – is simply not as easy as tapping on a keyboard.

Other plusses, however, include the games, which I can see – particularly for driving games and so on – being a major, major draw for the iPad.  Could it do for games what the iPod did for music?

Finally, a quick word about iBook, the digital reader which has generated much debate as a number of bits of kit bring about the much-vaunted death of the book in the face of digital versions.  Not that I would predict the decline of paper right now, but the books on the iPad are brilliant.  They scroll and turn over smoothly and engagingly, you can change the font, size and orientation, and with the excellent battery life I could imagine finding it very easy to sit on a train for instance and read a book off it.  And with the numbers of books that are out of copyright, finding free stuff of quality to read will not be difficult.

Overall, then, I could see the iPad killing off tiny wee midget laptops but not laptops like my MacBook – but then I don’t think it aims to.  Could I foresee needing to have this as well as a laptop and an iPhone?  No.  Is it, though, a really neat piece of kit?  Definitely.