If Inverie can unhelpfully be described as the capital of Knoydart, then surely Airor ought to be its second city – at least by virtue of being the only place I was aware of where there is anything more than a single dwelling in close proximity.

Airor is a lovely enough place in itself, but it’s all the more remarkable for the journey there from Inverie. It’s a beautiful route, especially noteworthy for containing six or so miles of well-maintained road that, as with the rest of Knoydart, is famously unconnected to the rest of mainland Britain’s road network. 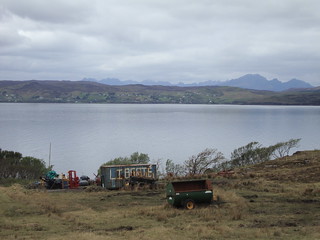 During our trip we cycled out there and back for the day, and although the weather was kind the hills were not. Once you get round the bay and past the edge of Inverie it quickly becomes a punishing pedal up and down steep inclines, which to be fair are at least mostly devoid of other road users.

And the views south across Loch Nevis to Morar and west across the Sound of Sleat to Skye are good enough that you can count the numerous breaks to catch your breath as essential photo stops.

There’s a surprising amount of life along Knoydart’s main highway too, including the apparently superb restaurant at Doune, a few houses, and then a cluster of more houses as you drop down the hill again into Airor. 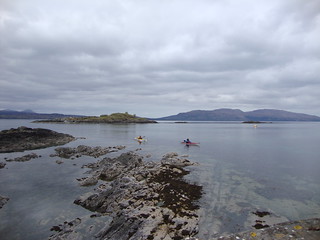 Airor itself is gently bustling – a pretty bay with views over to Skye, and the Road’s End Cafe which is unreasonably excellent for somewhere with both such a monopoly and a tiny residential customer base.

And the interest doesn’t stop there.

Follow the road past the village and up the hill, and it soon becomes a track that carries on round the coastline.

I think – and it looks from the map – that you can carry this on right round the north coast of Knoydart and end up in Barrisdale.

From there you can then head back to Kinloch Hourne and “civilisation” (or at least, the closest part of the main road network). 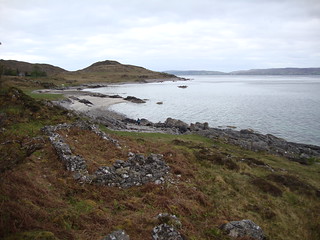 We however only went as far as a a lovely secluded beach, from where we could pick out buildings across the water on the south coast of Skye.

There was also a chapel – or at least, that’s what “chapel (rems of)” on the map signified.

It was just a ruin, with crumbled and overgrown walls, and no visible evidence of its former purpose. But it was clearly a reasonable size once upon a time – a reminder, again, that Knoydart was, pre-Clearances, home to settlements of some relative size.

Indeed, I learned on a later trip over the water to the excellent heritage centre in Mallaig that the total population of Knoydart in the 1851 census was 894. Just a decade later it was 531. Today, it’s about a hundred, and that’s following the boost that came from the start of community ownership. The stories in the heritage centre of brutality against residents during the Clearances are grim reading to say the least.

However, the Clearances didn’t just sweep away the people but, inevitably, the knowledge. There appears to be little information online about this chapel (rems of) at least using the limited placename keywords I have at my disposal. Literally the only reference I can find is on this webpage, which is a scan of a page from an Ordnance Survey names book for Inverness-shire dated 1876-1878. The reference reads:

This is the remains of a Roman Catholic Chapel, of which the side walls, and gable, are standing and are only about 4 feet in height no information concerning its dedicatory name, or when worship ceased to be held in it, could be obtained It is built on the property of J. Baird Esqr. Cambus Doon Ayrshire

That a record just a few years after the Clearances should be so bare in its grasp of facts illustrates how hauntingly quickly history can slip through our fingers. When was this chapel built? How many people congregated within it? When was it destroyed? …If indeed it was: perhaps it was just left to ruin.

So many questions, and I am sure answers are out there but they lie beyond my brief googling. If you know any more than what I’ve written, please do post a comment below.

It’s not, of course, the only mystery on Knoydart, nor the only piece of history lost to the sands of time. But for now, vast expanses of Knoydart sit quiet and empty… 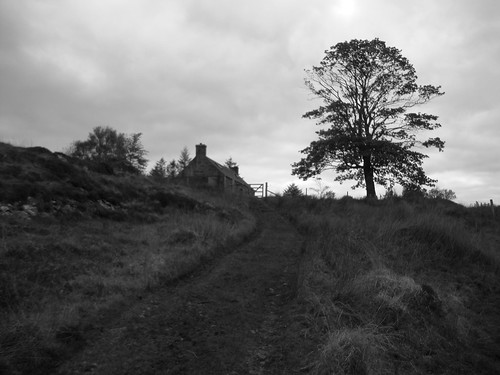