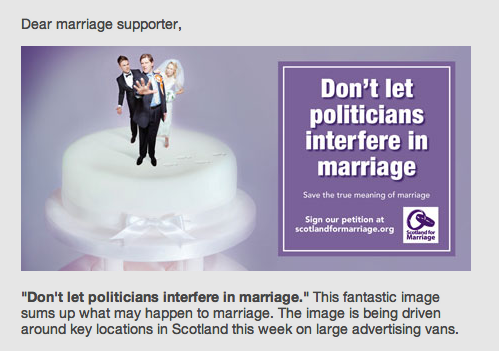 “Don’t let politicians interfere in marriage” the campaign group Scotland for Marriage tells us, at least according to an email someone has forwarded to me that includes the above image.  This is in response to the Scottish Government’s consultation on legalising gay marriage, something the government has expressed they are likely to come down in favour of.

Absolutely.  I couldn’t agree more.  Marriage is something politicians should have nothing to do with.  Imagine – passing laws that might impact on marriage!  A truly dreadful idea!  But to prevent politicians interfering in marriage, I’m afraid we will need to do more than simply prevent gay marriage:

I could go on, but I would only devastate myself with the appalling realisation of the extent to which politicians are interfering in marriage.  Right now, in this country, perhaps even in your community and involving people you might know – politicians are dictating how marriage works!  It must stop now!

Save marriage from politicians.  This could be your last chance.