I noticed the other day on Twitter that the Muslim Council of Britain was promoting a “visit my mosque” day across Britain.

Inverness’s small Muslim community has moved into a new building – I pass by from time to time, and as they were participating in the national open day on Sunday past, I thought it would be nice to pop in and take a look.

Inverness is of course renowned for its long Christian heritage – reputedly dating back as far as Columba – and a number of beautiful old churches. But there is more to the city faith-wise than that, and it’s a bit too easy to think of it as a very monocultural, white-skinned place.

It certainly doesn’t have the religious and cultural diversity of bigger places like Glasgow and Edinburgh, but as the city grows and develops, that is changing.

As I approached the mosque for my visit I did have a slightly nervous thought about what it would be like, and I quickly appreciated how weird and unsettling it must be for people to go into a church for the first time.

I’d been in plenty mosques before – but only ever on travels abroad, to the likes of Turkey or Albania, and most recently Armenia. I’d never been in a mosque in the UK, which is an odd omission given the increasing importance of Islam to the UK and indeed Inverness. 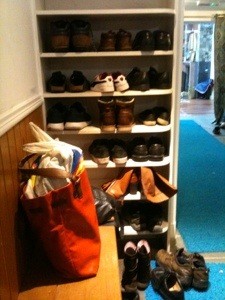 “It’s much the same, really,” assured one of the mosque members who welcomed me at the door when I explained that I’d only been visited them in other countries.

And, unsurprisingly for a religion that emphasises the equality of all people and the universality of God, it was. You left your shoes at the door as a sign of reverence for the holy place, the interior was peaceful and bright, and there was a main carpeted area for prayer. Inscriptions, caligraphy and notices were dotted around the room.

But something was different here compared to the likes of the mosques I’ve seen abroad in Muslim countries, and it wasn’t anything to do with the size. It took me a day or so for it to twig what it was, and I realised it was that the mosque was alive.

Most of the ones I’ve been to abroad have been spectacular, ancient constructions like Istanbul’s famous Blue Mosque, which have been so touristy they’ve felt more like museum pieces.

This one, however, here in Inverness, was functional, purposeful, and a living, breathing place of worship – in a sense no different from any church in town. As it should be, I suppose. And for a building that looks quite small from the outside, the mosque was comparatively big inside.

It was explained to me that the local Muslim community – previously housed in a tiny flat across town – had taken over the premises some months ago. It used to be a bar, and they had to do a huge refit to it. It sounded like a lot of work, and someone told me it wasn’t all finished yet. 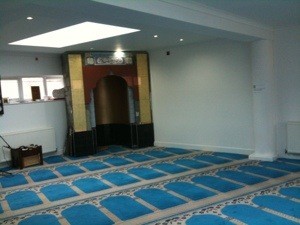 The interior felt snug and inviting, with newly installed roof windows letting in a lot of natural light to what must have been a pretty dark, dingy back room previously. The carpets in the main prayer space were lovely and soft – though I guessed that was probably a practicality, not only for comfort for those praying but also perhaps to minimise sound in a place that is meant to be a sanctuary.

I chatted to a few of the mosque members, including one, a white Scottish convert who has written this article about his experiences on the Independent’s website.

It was interesting to get a strong sense of the openness of the community in Inverness. Numbering just a few hundred in the wider Highlands, they include all sorts of nationalities, ethnicities and cultural traditions, and that of course necessitates tolerance and respect between the members. 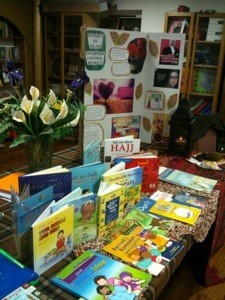 I was told that few of the stereotypical traditions of Islam were present in the mosque – for instance, women did not require to cover their heads when visiting, and indeed women had prayed in the main prayer space alongside men until they themselves apparently asked for the creation of a dedicated space elsewhere in the building.

And many of the traditions we associate with Islam, I was reminded, were often cultural practices from certain parts of south Asia from where many of the UK’s Muslim population originates, as opposed to being Koranic instruction.

Indeed, many such conservative practices we might associate with Islam – modest dress, covered heads, denial or suppression of sexual or religious minorities – are also to be found in the most traditional branches of Christianity or Judaism, religions which of course share specific geographical and scriptural origins.

I asked someone if I could

take photos on my phone, and I was told there was absolutely no problem. Though I did out of respect – and from my usual preference in photography anyway – try to avoid people.

That, however, led to some rather unrepresentative shots, because what the ones I’ve put in this blog post don’t show is the crowd of probably well over twenty or so people – all ages, various races – who were in the mosque at the same time as me.

Mosque members were chatting to visitors and introducing them to the various displays and the small library, children were running around, there was tea, coffee and refreshments on the go, and a lively but gentle hubbub about the place.

I sadly couldn’t hang around as I had to be somewhere, but I’d received a relaxed, friendly and entirely unevangelistic welcome, and a strong encouragement to come back some time to chat or just look around. 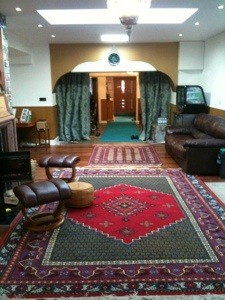 As I left, prayer time was about to start – I was warmly invited to stay and observe, though time was pressing and I was unable. As I put my shoes on and headed for the door, I passed some latecomers for prayer who were rushing in and removing their shoes.

The call to prayer, familiar to probably everyone, began to play – a recording, I think, though I didn’t see. As I left, the solemn tones rung in my ears, and I stepped back out from the serene atmosphere of the mosque to the Highland rain. It felt like quite a contrast, like returning to the Inverness I was used to.

And it really shouldn’t feel like such a division, I thought to myself. Should a mosque in a modern British town or city feel so unusual or novel? Many of the faces I saw in the mosque were people I saw around town, on the streets, working in local businesses. Surely as a community they shouldn’t be something set aside – rather they should feel like any old ordinary part of our society.

And perhaps crucially, mosques shouldn’t, like any community of faith, be separate, locked away, unknown and unnoticed parts of their local communities. Ensuring that isn’t the case, on the one hand, involves doors being opened, like they were on Sunday. On the other, though, it needs people to walk through those doors for the first time.

6 thoughts on “A visit to Inverness’s mosque”