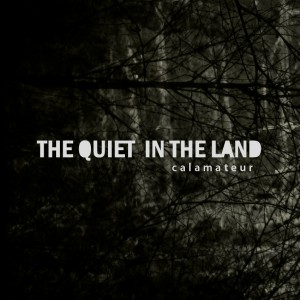 I blogged last year about Calamateur’s album Each Dirty Letter, and it barely seems like five minutes later that he’s produced another album – The Quiet in the Land.  I mentioned in Each Dirty Letter’s review Calamateur’s vocal versatility, comparing his voice to Thom York.  Such is his versatility, though, that I am going to have to revise that temporarily to somewhere in between Bono and Billy Corgan.

There is comparison with U2 and the Smashing Pumpkins beyond their lead singers though, because those two bands are who The Quiet in the Land reminds me of most.  Calamateur’s sound on this latest offering is rich, deep, dark, and verging at times on the tense and sinister.  As he says himself on his website, this new album, which regularly seems to crosses the line from rock to electronic, is very, very different from his previous album (effectively a collection of sweet but gently catchy ballads).  Time to use that “versatility” epithet again.

The music boasts sharp, dramatic guitars; haunting and evocative background instruments; edgy samples; uncompromising lyrics on Calamateur’s favourite topics of spirituality and humanity; and industrial rhythms that evoke the Smashing Pumpkins’ later electronic phase.  It is such a full, rounded, mostly heavy, and engagingly complex sound that it’s often hard to forget that Calamateur is not a band, but an individual: and an individual making the music in a tiny wee studio at that.

The Quiet in the Land is a thoughtful, engaging and absorbing listen.  I think it’ll take more than the few listens I’ve had to really appreciate it.