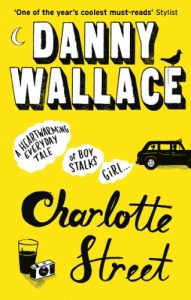 In an attempt to prise myself away from an often non-fiction-heavy reading list, and especially travel writing within that, I’ve been trying to read a bit more fiction lately.

Though it was a slight fail of adventurousness on my part a while back when I read a novel by a writer actually best known for his travel and memoir-based stories, Charlotte Street by Danny Wallace.

Having enjoyed Danny’s non-fiction – Join Me and Friends Like These are life-affirming and especially worthy of highlighting – I wondered how he would read as a fiction writer. Very well, I can conclude, as he brings his trademark cheeky spirit of adventure to a his first novel, a charming story set in London and published in 2012.

Charlotte Street centres around a well-meaning but struggling and rather hapless journalist called Jason, who finds a polaroid camera on the street dropped by a woman he’s just helped into a taxi on account of her heavy bags. She’s a stranger to him, so he has no way of returning the camera, and decides instead to develop them partly out of curiosity and partly to see if they provide any clues. Long story short: they do indeed provide a whole host of clues, and Jason embarks on a madcap journey around London and beyond in search of the life of this mysterious woman.

The journey packs in a bit of adventure, introspection, romance and laughter along the way, and is unashamedly upbeat, cheerful and likeable. It’s the sort of fun novel that isn’t really my typical cup of tea (mind you, I don’t like tea much), but I couldn’t help be infected by its charming, believable characters and unexpected story twists that are often bold but never the wrong side of absurd.

Charlotte Street would be a great holiday read. It reminds you that the world and the people within it all have something special to bring us. It’s not a book for the rock-hard cynic in life, though even the dour-faced may crack a smile at the story’s relentless faith in adventure, happiness and having something we believe in to strive for in life.