I had occasion to spend twenty-four hours in Invergordon recently. It gave much cause for reflection on what makes an attractive, visit-worthy, marketable town in the Highlands.

In some senses, Invergordon has a lot going for it. Yes, it is industrial – it is a busy port town and a major centre for oil rig fabrication. But don’t let that put you off. Nestled on the east coast of the Highlands overlooking the Cromarty Firth, it’s one of the largest towns in the area, it boasts a distillery and a few interesting independent shops on its grand, wide high street, and it is surrounded by some lovely scenery – not least out to the sea. Indeed, the industrial detritus adds to the atmosphere, with the rigs that rest in the firth lit up at night and making for some dramatic night-time photography opportunities.

But I want to dwell in this post on two aspects – one positive and one negative – of Invergordon’s approach to tourism. 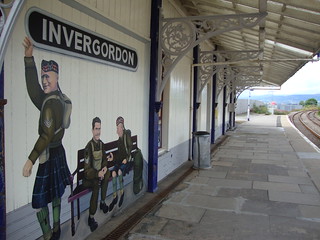 An eye-catching addition to the town in recent years has been a series of murals painted on various gable ends of empty walls across the town. It’s an initiative by a local arts group who have got lots of other community outfits together to help portray something of the town’s heritage.

For instance, there’s one featuring the RNLI, one portraying the local Highland Games, and a number adorning the railway station (which I mentioned in an article I wrote recently for Wanderlust’s website).

The murals are a great basis for a self-guided walk through the town, and this website has a good overview of the different pieces of artwork and the project as a whole. 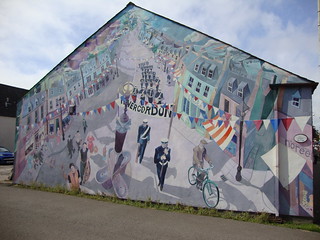 What’s particularly impressive about the murals is not that they’re eye-catching art in themselves (though they are), but that they are imaginative ways of using up what would otherwise be wasted, bland and unattractive parts of town.

The murals aren’t painted on already opulent and attractive buildings – they instead tend to brighten up some of the Invergordon’s worst examples of drab and uninspiring twentieth-century architecture.

So it’s a clever and creative way of brightening up the town in a way that doesn’t involve massively disruptive construction works.

When I did a quick photo-walk of the murals, the town was full of tourists stopping to look at them.

And where did these crowds of tourists come from? Well, that brings us to the negative aspect I wanted to mention. Cruises.

For a small town, Invergordon boasts a large port which is regularly visited by cruise ships. Indeed, there were two in town the day I was there, and as a consequence the town was unusually busy, even for a Saturday in August. 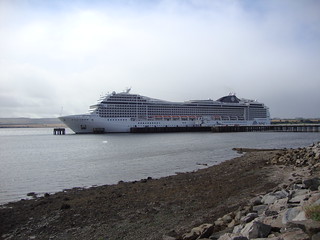 The two ships had disgorged hundreds of people for the day, who were all wandering around, cameras in hand, mulling over day trip options and trying to make the most of what Invergordon had to offer.

It didn’t require too much racial stereotyping to spot who were the passengers (elderly white Europeans) and who were the off-duty crew (groups of young, south-east Asian men obviously glad to get a bit of daylight).

It was a sad sight in a way.

But where’s the problem with the cruise ships? Surely it’s a good thing that hundreds of visitors see the town and surrounding area who might not otherwise do so?

For a start, cruises are incredibly environmentally unfriendly. Ships like this produce a huge amount of waste and pollution as they chug their way around the world. The cruise ship industry is proving controversial and damaging in a number of places, not least Venice (see here and here) or Dubrovnik.

That latter link is from travel journalist David Whitley (the self-styled “Grumpy Traveller“) who has also complained about cruising here, It’s easy to agree that cruises don’t really allow towns to make a rich, deep, meaningful gain from cruise passengers – they merely gorge superficially and briefly on their vague, passing interest.

Whisked away on day trips or left to wonder around a small place such as Invergordon with not much to do, significantly less money will be spent by tourists on cruise stops than if they stayed, ate and shopped in the area for a longer period of time.

Of course, there’s no evidence that the cruise passengers would visit the likes of Invergordon in a deeper way if it wasn’t for the cruises, but you can’t help wondering that the town is doing nothing to attract something more sustainable, and rather than creating a better quality tourist experience is simply and unimaginatively making what quick, small buck it can from the ships. 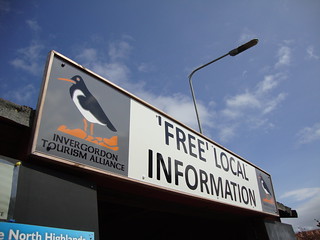 And it’s not even as if it’s putting much of an effort into that, either. At the “free” tourist information point (right) on the main road (why the inverted commas? Was the information not really free?), a tiny wee hut that would give an ice cream van owner claustrophobia, I perused the options.

It seemed the highlights were a free cup of tea and a trip to the loo at the local Church of Scotland, and a craft fair in the ugly (thought admirably mural-enhanced) museum, below. The rest of the options were short bus tours to other parts of the Highlands.

As a local friend who I was with wondered, why is there not a big visitor centre right on the shore front, complete with museum, decent local information, restaurant, and so on?

It would certainly be hoaching on cruise ship days, giving something to do for cruise passengers who may only have four or five hours to kill, and providing a haven for daytrippers in urgent need of a wet weather option. It would be an especially handy facility if integrated with the bus and rail stations. 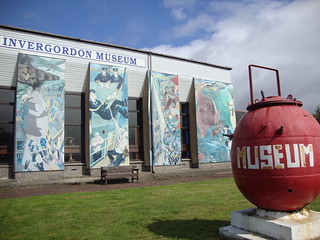 Indeed, the town’s industrial side could be turned into an advantage here – a vistor centre or museum could emphasise the the contribution of oil, smelting and shipping, and even the town’s rich military history (the only real sign of which appear to be the railway station’s murals).

When one heads to the Highlands with only cliched images of wet sheep and windswept moorlands, something as dynamic and unusual as a museum of heavy industry could be a great way to surprise visitors, challenge perceptions, and exceed expectations.

Such thinking is, I’m afraid, a sharp contrast to the low-level industrial decay and small town nonchalance that instead greets a visitor straight off a cruise ship.

In a way it summed things up in an alarming way. Invergordon really doesn’t fulfil its potential as far as tourism is concerned. Its lazy reliance on humungous cruise ships that utterly dominate the town means that it isn’t really kitted out for a more meaningful tourism. There’s a risk that folk passing through may do little more than the cruise passengers, then, and just take an idle, half-interested look around before moving on again.

Mind you, it doesn’t have to be like that. The murals perfectly showed that Invergordon is also a town of innovation, enterprise and creative spark. It would be encouraging to see more of that in what could be a real gem of Highland tourism.

A few more photos from my time in Invergordon can be found here on Flickr.

2 thoughts on “Cruises and murals”