In the week we’re in the Faroes, the islanders are taking on Scotland and Italy in Euro 2008 qualifiers, and we’re trying to get tickets.

Partly due to the Scottish underdog instinct, I’ve always been interested in football in Europe’s minnow nations.

The Faroese gained full UEFA status in the 1990s, and – apart from a famous 1-0 over Austria – were originally the archetypal whipping boys of European football alongside the likes of San Marino and Liechtenstein.

With barely 50,000 inhabitants, and a national team made up of fishermen, students, postmen and the very occasional full-time footballer, any draw or win is still a major achievement for the Faroese. But they have improved slightly over the years, and have relied, like many weaker teams, on lightning-swift counter-attacks.

Scotland know this to their peril, having been held to draws twice in the islands, the second a 2-2 draw in 2002 under Berti Vogts‘ dubious management, in a tie when the Faroes actually led 2-0 at half-time. While the match is infamous in Scotland for the outrage about Scotland’s performance, you can’t really take away from the excellent Faroese goals. 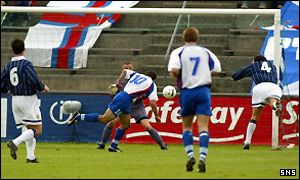 Both – if I recall correctly – involved quick breaks from defence, long balls to the right wing, and a cross into the centre, where school teacher Jon Petersen scored well-taken goals before the Scotland defence could even realise what was happening.

In fact, Scotland were actually lucky not lose a third goal in an identical counter-attack not long after.

The two draws against Scotland took place in Toftir, before the new national stadium in Torshavn was built. Apparently, the Faroese FA have switched back to Toftir for the forthcoming Scotland match, presumably to recapture the spirit of those two shock results. So it promises to be a real nail-biter.