$55 American dollars arrived in the post over the weekend.

It’s payment for use of this photo on the right, which I took at the Coldplay gig last year.  The effects company who did the fancy stuff at the gig obviously found my photo on Flickr and asked if they could use it on their website.

It’s quite a novelty to see the green stuff, having last seen it in September 2008, when Justin and I “did” the west coast of the USA.  With any luck, you’ll read all about that adventure in the sequel to “Up The Creek Without A Mullet”.

The notes (or bills, as the Americans would call them) are sitting in my wallet just now, waiting for me to get to the bank.  I’d better not inadvertently try to use them in a shop in Inverness beforehand… 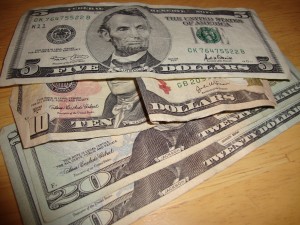