I don’t really know Nairn very well. I’ve been through the town along the Moray Firth from Inverness several times by both train and car, and have been to its huge and beautiful beach a handful of times. But I’ve never stopped in the town itself nor explored it to any depth. Which is a poor show given it is so close to Inverness and, from the little I discovered last night, is a charming little place. 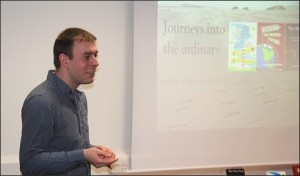 on the train, naturally) to do a book event, hosted by Nairn Bookshop at Nairn Community and Arts Centre as part of Independent Booksellers’ Week. In an age of big retail empires – and it might be controversial to say so, but they do have their place – it’s nice to be able to celebrate little independent bookshops.

There are all too few of them in this part of the world. There are none in Inverness, other than second hand ones, and Nairn is the closest I can think of. So as an independent author it was fitting to be able to join up with an independent bookshop.

The event itself was hugely enjoyable. It was a lovely, warm, engaging crowd of around a dozen. What was particularly nice was that I knew only one person in the audience, meaning that nearly everyone had seen publicity and decided it was worth coming along. And I hope they felt it was afterwards too… 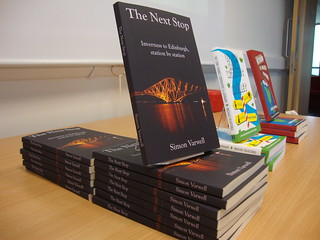 While I touched a little on the mullet mission, the main focus of my fifty-minute presentation was the journey that became The Next Stop. I relished the challenge of trying to tease out and articulate the sense of adventure that can be found in the most ordinary and everyday places; and I think from the audience’s positive reactions and interesting questions that they got the message.

If it sounds daunting to have done a fifty-minute presentation, it really wasn’t. It was great having that much time and space to play around with; allowing for a wide range of photos and readings from different stages of The Next Stop without having to pick and choose or condense things into just a couple of snappy bullet points.

It was an extraordinary contrast to the extremely stressful and nerve-wracking experience of preparing and delivering a rapid-fire pecha kucha, like I have done twice for the charity fundraiser A Night of Adventure. Dwelling on this thought during my preparation a day or so prior to the event brought to mind the famous quote that I remembered went something roughly like:

It’s a very true statement, and I’ve since discovered that it is a quote of unknown origin and multiple manifestations. 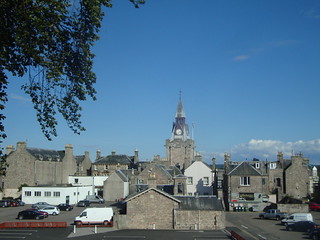 Anyway, I not only enjoyed my talk but also appreciated the little bit of time afterwards that I had to explore the centre of Nairn before my train back to Inverness. It is an admittedly run-down place here and there, but boasts some lovely buildings and a host of independent shops too besides the bookshop.

At the strong suggestion of one of the audience, I also noted a plaque at the station that commemorates the opening of the Inverness to Nairn railway in 1855 – a plaque which the audience member himself had designed.

It was good to get a fleeting little poke around Nairn. I must be back for a deeper explore some time.

Thanks to all who turned up, thanks to the Nairn Bookshop for hosting and promoting such a fun event, and thanks to the very helpful staff at the excellent Nairn Community and Arts Centre. Thanks finally to the indispensable Nairn community information website A Gurn from Nurn for giving permission to use their photo from this kind blog post about the event.