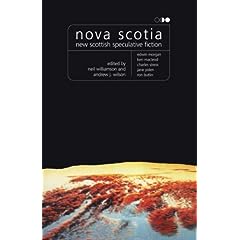 Over the past few weeks, I’ve been reading Nova Scotia, a collection of what describes itself as “Scottish speculative fiction”.

It’s a compilation of short stories from the genres of science fiction, fantasy, horror and alternative history, written by various names in Scottish literature most of whom I had never heard of.

I must confess I am not a huge reader of fiction, and bought the book mainly for its very funky cover.

The stories are diverse, ranging from magic, fairies and witches through to thought-provoking predictions of the near future, but all of them have some sort of roots in Scotland – either holding up a mirror to our country and its values, imagining an alternative version of Scotland, or describing the unreal lurking very close to the surface of the country we think we know well.

Disappointingly, I only liked a little over half the contributions. Many were plodding, confusing, pretentious, or based on premises I found too divorced from our reality to be able to relate to or enjoy – possibly due to my inexperience of reading such genres.

Some, however, were a delight, with fantastic concepts, beautiful language, and gripping characters skilfully packed into barely a few pages each.

One story tells the delightful short tale of the fight against a huge, carnivorous monster discovered in a pond in a Glasgow park. Other stories I enjoyed or found thought-provoking contained imaginations about things like the spread of Christianity to alien races, outwitting the Devil over a pint, and an Island-meets-1984-style story about our conceptions of the reality we exist in.

Perhaps my favourite was a sad, seemingly eco-minded, tale of a group of strange insect-like creatures, declining in the face of scarce resources and an increasingly hostile environment. This surprising and imaginative tale was written in a beautiful, haunting style, although its placing at the end of the compilation left the whole book with an unnecessary downbeat end – a shame given the positive and aspirational tone of the introduction and most of the stories.

But it was well worth the purchase – with so many stories contained in Nova Scotia, there’s bound to be at least one or two to get everyone either thinking or smiling.