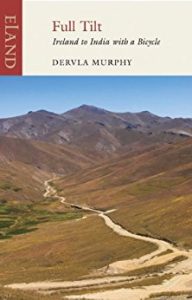 In the blog post that started this whole project, I said that I couldn’t instantly think of any female travel writers when I realised I’d not read any. Though one of the very few names I would have been able to think of if I’d had a bit of time or been prodded, would have been the writer of February’s title.

Dervla Murphy, from Ireland, is probably one of the greatest living travel writers, with a reputation stretching across decades. She’s not only famous for the book I’m reading this month, but for a great many books written following journeys the world over, and a relatively recent focus in her career on Israel and Palestine has brought a strongly political and humanitarian dimension to her writing, at least going by this interesting interview I read with her a while back.

It does seem, however, that Full Tilt: Ireland to India With A Bicycle is the book that put her on the map, being her first title. Published in 1965, it instantly conjours up a world that, though not all that long ago, was a very different place – a pre-internet, pre-EU, Cold War era that inherently makes travel a different prospect from today.

And when I settled on undertaking this project I rather liked the idea of including Full Tilt, which was recommended to me by Twitter contact @bazzargh. The book is a simple premise – what could be better than an A to B journey? – the title does what it says on the tin, and it takes in two continents and numerous countries. The idea of a big epic journey like this isn’t remotely original, nor even is doing it by bicycle as Murphy did. But of course, back then it would’ve been an enormous undertaking, and it is all the more remarkable for being, as the author writes in her foreword, a dream she conceived when she was ten years old and which she didn’t give up on.

Such tenacity sets the tone for the book, because to be so determined to implement a childhood whim must require the sort of guile and determination that can get you through the sorts of scrapes the back cover describes – from weather to wildlife to dangerous men. That she travelled through such dangers armed with a pistol made me realise that I was dealing with a serious badass here, and I was almost intimidated last night as I picked up the book to read the cover blurb and start out on the foreword.

Thankfully, this is no muscular adventurer delivering us a mere pulp non-fiction of page-turning, action-packed excitement. Clear from the few pages I’ve read (plus an extract from her in last month’s book) – but above all self-evident in the fact that Murphy has had such a long and distinguished career – is the fact that she is a beautiful writer too, with elegant, rich and thoughtful prose and a warm, gently witty character shining through.

I’m looking forward very much to reading Full Tilt. What will I learn about the countries she travels through? How much of that world, fifty years ago now, will feel fresh or relevant? And how will the story of a lone female cyclist differ from how a man might have experienced or written the journey? And, above all, will I be convinced at the end of it that I should hunt down more of her books in the future?

I’ll write a review at the end of the month. And I’ll put good money now on it being a very positive review indeed.