If you read Dave Gorman’s blog – and it’s always an entertaining and informative read – you’ll be aware of a difficulty he’s been having with Flickr, the photo community he (and I, and millions of others) are a part of.

But in a nutshell, the problem is that a company contacted Flickr to demand removal of one of his photos because they claimed it breached their copyright.  They were entirely wrong, and their email was the result of a careless “scattergun” approach to anything that might vaguely be similar to their business.  However, Flickr deleted the photograph when what they should have done was hide it until the issue was resolved and then put it back again if and when the claim was proved false (which it obviously was).

To no avail, Dave has attempted to get Flickr to reinstate his entirely legitimate and legal photo.  For some reason they have refused, and mysteriously they have also refused to explain why they are not doing this, despite the fact that reinstating it is technically not a problem and indeed is the legally correct thing to do.

The diagram he published on Flickr, which you can see in that third blog post of his above, summarises things neatly: One big disappointment for him is that the photo that was removed was one of his most popular ones, widely linked and commented on.  He’s easily reuploaded it, but  all the comments on the original one are now lost and the numerous blogs and articles that embedded his original picture or linked to it now have a broken link.  He’s lost that original picture not through any fault of his own but firstly through the shoddy actions of the complaining company and secondly through Flickr not adhering to either reason or law.

If you are a member of Flickr, you could email them to complain and ask that they reinstate his original picture.  I just have.

This of course has nothing to do with jumping on a bandwagon, and is only partly about helping a fellow Flickrite.  It’s mostly about protecting the community as a whole.  If it can happen to Dave, it can happen to anyone:

How safe are any of our favourite photos on there, if this is the haphazard way Flickr treat them?  I am going to have a think about whether I want to carry on using Flickr if this is their attitude.

One of the problems, I suppose, of being a large photo community is that there will always be some odd behaviour.  Something annoying happened to me the other day on Flickr.  Not as serious as Dave Gorman’s lost photo, but peculiar nevertheless.

I had an email from a travel guide company called WCities wanting to use one of my photos.  It happens quite often – people might be writing some form of publication and will search in Flickr for photos relating to their topic.  Hundreds, if not thousands, of photos will come up in the search and they will send out standard messages to the owners of all of them asking if they can use them.  Enough will presumably reply in the affirmative to make the “sweep” worth doing.

WCities wanted to use the following photo of mine of Aberdeen Arts Centre: I was bemused, to be honest with you.  It’s far from brilliant and I’m not even sure it’s my best shot of that building.  No matter, though, because I as a rule charge for commercial use and I responded to say so.

I then got another message from them: 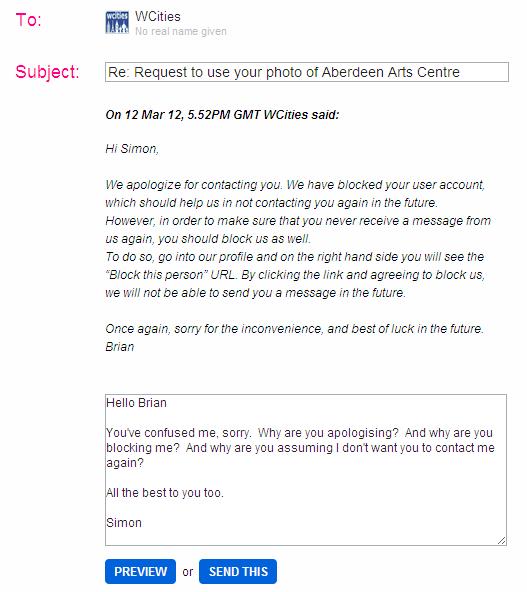 As you can see, they apologised profusely for contacting me and said that they’d blocked me so they would never inadvertently email me again with a similar request.

I thought their reply was rather a bizarre attitude to take, because their original message hadn’t offended or annoyed me, and it had taken me barely a minute to write out a reply telling them that I would expect a fee for use.  I wrote a message back to them asking why they were apologising and why they were assuming I wouldn’t want them to contact me again in the future.