This is a piece written about my third trip to Armenia in 2016. Click on the main Armenia page for an overview and to read all posts in the series. 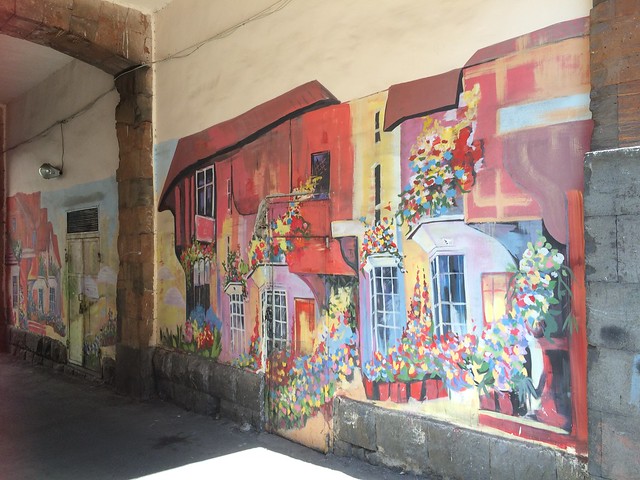 For a country that rubs shoulders with so many neighbours, and which has been a part of various empires over the centuries, Armenia can strike you as a pretty mono-ethnic place. Despite borders with Georgia and Iran (plus less friendly Azerbaijan and Turkey) and strong links to Russia, it’s nonetheless easy to conclude that virtually everyone is Armenian in the country.

And that’s not far off the truth. Armenia’s population is either indigenous to the territory, descended from those who fled eastwards from the 1915 genocide, or more recent returnees from the vast diaspora. Everyone speaks Armenian, albeit sometimes the distinctly different diaspora dialect of Western Armenian. It’s no surprise, then, that 97% of the population are ethnic Armenian.

Yet that’s not the whole story. Dig a little, and you find that things are not quite so simple. For a tiny country with one predominant nationality and language with roots that are centuries, even millennia, old, there is a surprising diversity, even within the Armenians themselves. And on a third visit to the country in September 2016, I had the privilege, through various conversations with locals, to find out a bit more about this.

The country really does feel very European. If you were parachuted in with no clues as to your location, I’d guess that the architecture of the buildings and look of the people – if not the unique alphabet – would make you feel you were somewhere in the Balkans or Central Europe.

Indeed, I sometimes have to remind myself of just how far east the country is. Look at its location on a map, and besides those of neighbouring Georgia and Azerbaijan the nearest capital cities are Damascus, Baghdad and Tehran. Events in Iraq and Syria – barely a couple of hundred miles away – have impacted significantly on Armenia, not least through the arrival of a few thousand refugees from Yazidi and Kurdish populations. 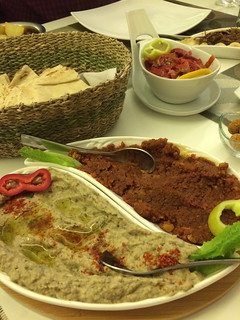 Also among the refugees are a great many Syrian Armenians – ethnic Armenian Christians who were either centuries-old members of the vast-spread Armenian population of the Ottoman Empire or descendants of those who fled to or were expelled into the desert at the time of the 1915 genocide.

And it was the lives of those Syrian Armenians I learned a little about one evening in the company of a local contact in Yerevan. He spoke highly of these refugees, who had often arrived with few possessions but who were doing their best to make a new life in Yerevan.

Yet, my contact told me, they were not universally welcomed by longer standing Yerevanis – in a bustling city not without its own economic problems, the objections are probably sadly familiar. For that reason, he told me, he was always especially keen to support their businesses.

In one Syrian Armenian restaurant, the differences and similarities were both apparent. The staff of course spoke fluent Armenian – it would have been their home language, besides Arabic – but the food was distinctly unArmenian. Gone was the Russian stodge, the heavy influence of potatoes, pickles and cabbage, and in came softer textures and light spices, and that ubiquitous Middle Eastern staple of humous. 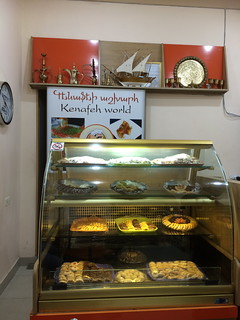 Afterwards we visited a sweet shop, to enjoy the nutty, honey-laced pastries of baklava – something again that would not be out of place in the Eastern Mediterranean, and perhaps not so unlike the treats enjoyed by Pakistanis or Iranians.

And as I write this, I’ve uncovered this fascinating article in the Guardian from earlier in the year that reports more on this new wave of Syrian food in the country.

It is not just the Syrians who have impacted on the palates and menus of Yerevan. Other returning Armenian diaspora – coming back for more peaceful, positive reasons – have brought a modern and very westernised energy to the drinks industry in the country. To a traditional output of fruit wines and cognacs – often delicious and always flavoursome, thanks to the country’s lush countryside – have been added new ideas.

In a bizarre coincidence I found myself on my flight out to Armenia chatting to a Scottish importer of Armenian wine, who said that many returning diaspora were combining old techniques with modern technologies, improving the quality, quantity and reputation of Armenian wine. 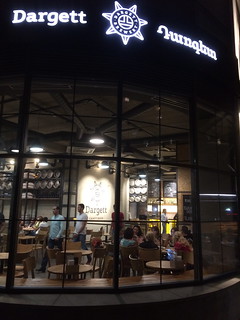 And in a region not known for its beer, even the craft ale revolution has made an appearance. This of course mightily caught my attention, and I spent a couple of enjoyable evenings in the city’s two new(ish) microbreweries, Dargett and Beer Academy, sampling beers that were the match of many European beers I’ve tried.

On one of those evenings, I was told about River Fest, a music festival in the countryside outside Yerevan started by Armenian immigrants from Massachusetts, bringing a bit of Woodstock-like hipsterism that has captured the imagination of the music-hungry young crowds of Yerevan.

Not all immigration to the country makes such an obvious impact or is as sizeable or notable. In one of the more intriguing stories I heard about Armenian minorities, there are apparently a few villages of the Molokan, a little known ethnic Russian religious sect who differentiate themselves from the conventional Russian Orthodox Church in many ways, not least among some of them by a spiritual practice of jumping. It is apparently done repeatedly until one enters a trance and draws close to the Spirit – a physical routine that might parallel that of Turkish Islam’s well-known dervishes.

There’s not much online about the Molokan – and what is there is a baffling and often contradictory rabbit hole. But I was surprised as I researched this post to find an extract of a 1905 book on Russia by the Scottish writer and Times journalist Donald Mackenzie Wallace (who I confess to have never heard of). In a fascinating chapter on the Molokan that you can read online, he writes:

Another sect belonging to this category is the Jumpers, among whom the erotic element is disagreeably prominent.  Here is a description of their religious meetings, which are held during summer in the forest, and during winter in some out-house [not a toilet] or barn: “After due preparation prayers are read by the chief teacher, dressed in a white robe and standing in the midst of the congregation.  At first he reads in an ordinary tone of voice, and then passes gradually into a merry chant. When he remarks that the chanting has sufficiently acted on the hearers, he begins to jump. The hearers, singing likewise, follow his example.  Their ever-increasing excitement finds expression in the highest possible jumps. This they continue as long as they can–men and women alike yelling like enraged savages. When all are thoroughly exhausted, the leader declares that he hears the angels singing”–and then begins a scene which cannot be here described.

I got the impression from my contact that many Armenians know little or nothing about the Molokan. While that may be sad, it does at least illustrate that a country so mono-cultural on one level can, with a scratch of the surface, actually reveal the strangest, deepest and richest of diversities.

Perhaps, while Europe is facing a rise of ethnic nationalist chest-beating, this surprising tapestry is something of which Armenia could and should be more proud.

See the photos I uploaded to Flickr from my recent trip here, and my combined Armenia set, including photos from all three of my trips, here.