Returning to a place you’ve been to already can be a curious experience. Places can be so tied up with past memories or circumstances that seeing things anew can be strange or disappointing. One of the best things to do, then, is to see that place from a completely different angle rather than try to “relive” what you saw and did the first time.

The weekend before last I was in Toulouse, in the south of France, and I was glad to be able to see a side of it I didn’t see the first time. 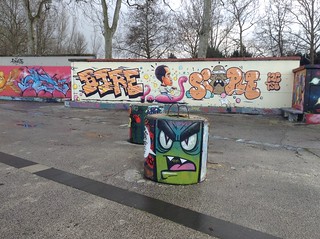 When I visited in 2012 at the start of a big three-week adventure through Europe, we stayed near the attractive, bustling city centre and saw all the top sights. This time, though, I was in an industrial estate on the edge of town.

The purpose was an Esperanto conference. We stayed in a surprisingly pleasant hotel surrounded by industrial units, big supermarkets, and a sprawling, modern agricultural college campus where our seminars were held.

I was told that just a few years previously, it had all been fields. Toulouse was clearly a growing place, and the area we were in didn’t just feel soulless and functional in the normal way that most industrial estates do: there were clearly parts that were still being built, housing schemes still to be filled, and character and life still to fully emerge.

So it was refreshing – perhaps even reassuring – that a place as classically beautiful as Toulouse had a more real side to it too.

Of course, there was time to see the “proper” sights, and I even managed to see them through new eyes – those eyes in this case being the language of Esperanto. As is customary in an Esperanto gathering, there were chances to explore and be shown around our host town by locals, and when we were led on a guided tour by an Toulouse Esperantist, the most amusing part of it was the reactions of passers-by.

Frequently people would stop, listen and very obviously try to tune into this strange language to figure out what it was. At one point, a woman stopped and said “Italiano?” I, standing at the back of the group, said “Esperanto” and she exclaimed “Esperanto!?” back to me as if it was the most surprising thing she’d heard all day. Which I’m sure it was.

She probably left us wondering where we were all from, and what we were all doing there, her very ordinary day in her home town enlivened somewhat by this unexpected encounter. Maybe she started to look at Toulouse through different eyes too.

A few more photos from the trip can be found here. You can read a translation of this post in Esperanto here.