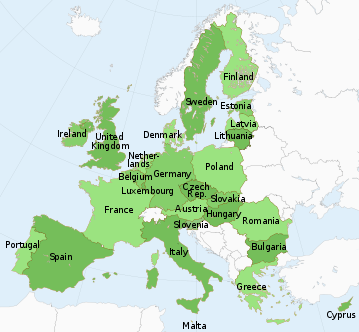 The EU will be jealous of me, because unlike them I am shortly to remove that annoying grey bit from the middle of my “where I’ve been” map.

Just as Lesotho makes South Africa look like it’s forgotten something, the European Union purists must have been annoyed for some years now by that irritating and persistently neutral bit that can’t be coloured in despite the union’s recent spread eastwards: yes, the land of yodelling, clocks and versatile pocket knives that is Switzerland.

By the time you read this we will be en route to France on holiday, and are staying in the east of the country within day trip distance of the Swiss city of Geneva.

It’s a country that’s easy to scorn for its resistance to EU membership, and anyone who has returned home to the UK from a trip abroad will know what I mean.

When you approach customs, there are generally channels for two groups of passport holders – those from the European Union, and then those from other countries.  Those benefitting from the freedom of movement the EU allows can, broadly speaking, treat the union’s four and a bit million square kilometres of territory as their home, a cursory check of the passport being enough to welcome you to a country which, if it is not your own, is still somewhere you’re welcome to live and work in, on the whole without restriction.  Meanwhile those outside the European Union are directed to another channel, presumably so their passports and visas can be checked and stamped to ensure they are entitled to visit the country.

But of course, if you look again at the directional signs above the channels, it’s not as simple as “EU” and “other”.  The EU channel also extends the “fast track” to the European Economic Area (which include all EU member states plus Iceland, Liechtenstein and Norway) and to Switzerland.

I can understand the inclusion of the EEA – an agreement exists between it and the EU that allows those three named EEA members to access the EU’s internal market in exchange for adhering to relevant legislation.  But Switzerland opts out of the EEA, for reasons I honestly cannot be bothered to research.  Why, then, they have free passage through the same passport stream as EU and EEA citizens, I have no idea.

Of course, there are strong arguments both for and against membership of the European Union, and the Swiss are perfectly entitled to choose not to be members.  But by joining EU channels at immigration points, it’s clear that they are getting all of the benefits of EU membership without the burden or responsibility of membership.

Why should I be expected to share a passport queue with a bunch of folk who pay nothing to EU coffers, for whom Herman van Rompuy does not speak, and who face none of the joys of the Common Agricultural Policy and none of the ire of UKIP?  This is a major injustice I am sure you’ll agree, and when I return to the UK I shall be sure to tell the uniformed customs person to whom I show my passport that I resent sharing space with the freeloading Swiss.

Revenge is planned, though.  Apart from entry to a few interesting-sounding museums in Geneva, I plan on spending as little money there as possible.  Mind you, that frugality is not just to spite the Swiss for opting out of the EU while claiming its benefits: it’s also because their prices – already among the highest in Europe – are apparently rocketing as their currency strengthens against the euro.

So, the challenge is on to get as much out of Geneva as possible while spending as little as possible.  It’ll be my first time in Switzerland but third time in France.  I’ll report back on both countries – and the rusty state of my French – in due course.