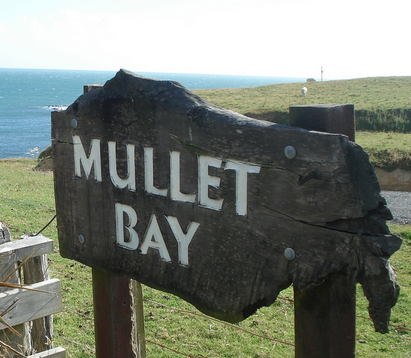 If you’ve read The Return of the Mullet Hunter, then you’ll remember that towards the end of my mullet-hunting adventures in New Zealand I visited Mullet Bay (right), near Invercargill at the south end of the South Island.

I stayed in a hostel in the city, and when I left in the morning I realised I’d been sharing a dorm with what appeared to be a Gandalf lookalike. However, we exchanged only a few words as I headed off, beginning my long journey north back to Wellington.

I’d often wondered about this curious individual. I had written him off in my head as simply one of those people you cross paths with for a few seconds when travelling and who you’re unlikely to ever encounter again.

Delightfully, though, I had an email the other day from a New Zealander called John, who had recently finished reading The Return of the Mullet Hunter. John used to live near Invercargill, and told me that he knew precisely who my wizardly roommate was from my description of him. He writes:

it could only have described Sam Sampson, a resident character of Stewart Island (NZ’s third & by far smallest island). The attire you described (long white gown & staff) was mostly reserved for visits to the “Mainland”, usually for a stint in rehab! His predictable demise came about a couple of years ago, attributable to the consumption of approximately one 40oz bottle of a rough local whiskey every day. Sam had always fancied himself as a Stewart Island version of the Wizard of Christchurch.

I’d not heard of the Wizard of Christchurch, but if you’re interested he has his own entry in Wikipedia. Anyway, I’ve looked more into Sam Sampson, who seems to have been a notable character even before his sad descent. A bus driver, tour guide, poet and general well-kent face on Stewart Island, his transformation into alcoholic wizard apprently earned him the moniker “the Fluid Druid”.

There’s an article from the Southland Times in 1999 which describes his “coming out” as a wizard, and this article from the Stewart Island News contains (from page 7) an extensive tribute to him with some amusing anecdotes.

It seems that within a year of me encountering him, the Fluid Druid had passed away. It’s a nice reminder of how small the world is, though, that I can now say that I know a little more about him and what a character he was. It’s infinitely more than we can usually say about the many people who drift in and out of our lives on a daily basis.

I’ll give the last word to John, who emailed me again to share a couple more anecdotes which he remembered about Sam Sampson, the Fluid Druid:

In the days prior to Stewart Island tourism being taken over by a slick national operator, Sam used to take unsuspecting passengers on a bus tour around the island’s 20-odd kilometres of tar sealed roads. It was best to book an early tour as Sam wasn’t usually too pissed by morning tea time! His partner in crime was Billy the Bus, another island identity in his own right. On the occasion of Billy’s 21st birthday Sam poured a bottle of the aforementioned favourite tipple, Wilson’s Whiskey, into Billy’s fuel tank. Sam declared Billy had never run better!
Sam & Billy entertained countless visitors to the island in the glorious days before Health & Safety. One of Sam’s favourite yarns was to tell his passengers about the flock of trained carrier seagulls found on one particular beach. He would then drive onto the foreshore, get out & announce to the gulls “nothing today thanks girls”. He would get back into Billy & slam the door hard. The ‘girls’ would of course fly off at the sound of this startling noise and Sam would remark on their efficiency. Larking aside, Sam had plenty of interesting local knowledge and a fabulous style of delivery. His tours were often the highlight of holidays on the island. To my knowledge, he never crashed Billy!