I must confess to having a soft spot for the Luxembourgish language. Partly it’s a combination of my interests in languages and small countries. But also it’s because one of my lesser-known skills is the ability to sing “Happy Birthday” in Luxembourgish.

Back in my university days, a bunch of us undertook a long minibus drive to a conference in Nottingham. One of the other guys was from Luxembourg, and on our journey south he said that when we pulled over next he would need to call his mum as it was her birthday. Someone had the great idea of him teaching us all “Happy Birthday” in Luxembourgish, and when he called his mum the first thing she heard was a choir of strangers singing to her in that little-known language, her native tongue.

Cast your mind back a century or two, and Europe looked very different from today, with a whole host of small countries, often little more than city states, peppering the map. Luxembourg would not have seemed unusually small. On top of that political fragmentation was a linguistic fragmentation, and the diversity in accents and dialects in big European countries like France, Germany or Italy is actually a manifestation of the fact that there would have been extremely strong variations within the major language groups, presumably exacerbated not only by geographical factors but political divisions too.

Indeed, I heard a curious anecdote some time ago, in that even as recently as the early twentieth century and even in such a politically unified state as France, the French language’s regional variations were so strong as to be often unintelligible, and there are recorded examples of groups of French soldiers in the First World War opening fire on each other because their different dialects were mistaken for that of the enemy.

Of course, the world is a much more interconnected place these days, and waves of political unification plus much better transport has meant that many once-distinct dialects and languages are now dead or dying.

One plucky survivor, however, is Luxembourgish, protected by its country somehow maintaining its independence since the 1800s, and one of the country’s three national languages alongside German and French. Although within the Germanic language family, Luxembourgish has a significant number of French words in it, and sounds rather like German spoken with a Dutch accent. I tried to learn a little prior to our weekend away, but I retained little except for the standard greeting “moien” (pronounced “moy-en“), a delightful little word that tripped cutely and concisely off the tongue.

I was curious to see how much of the language we would see in our few days in Luxembourg City, and I was a little surprised to discover that the answer was “not very much”. As soon as we got off the train at Luxembourg’s railway station, French was everywhere – on station notices, street names, signposts and even adverts in shop windows. As such, when we arrived at our hotel it felt quite natural, after saying “moien”, to switch to French.

It was, in fact, French that we ended up using pretty much the whole weekend, although as we explored the city more deeply there was also quite a lot of German to be seen – often at the same time (see right).

It made for a confounding impression to the visitor that the country really didn’t know which of the two big languages it wanted to be seen to use.

So where was Luxembourgish in all of this?

“It’s not really a written language,” explained a Canadian man we got speaking to in the city’s evangelical church, where we worshipped on the Sunday morning.

That was a curious experience, incidentally. As we sat in a pew before the service, we overheard the congregation chatting away and greeting each other almost entirely in French, and then when the minister stood up at the start of the service, he spoke in German and did so throughout. 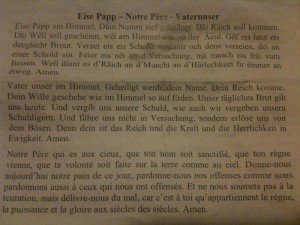 The handout was mostly in German, but with certain sections in French too, and the Lord’s Prayer written in all three languages (see left – and click to see it bigger).

It was an international congregation, the Canadian explained, with the country being overwhelmingly Roman Catholic and the Protestant minority being mostly foreign residents. The service wasn’t always just in German, he added. Sometimes they used French too, and often the service was fully bilingual. Luxembourgish, he told us, was mainly the language of the schoolyard and home.

It was also, as we found as we channel-flicked in our hotel room, a language of television; and it seemed there was an attempt to make Luxembourgish a language of literature too, as we discovered in one of the city’s handful of bookshops. Alongside the huge numbers of shelves devoted to French and German (and a small English section) was a not inconsiderable range of Luxembourgish books – everything from children’s stories to original and translated novels. The German guy behind the counter who we spoke to told us that he was quite new to the country and was learning Luxembourgish, though of course his German was more than enough to survive on.

That Luxembourgish is spoken by pretty much all Luxembourgers as their first language is an impressive feat given the ways in which French and German (and to a lesser extent English) permeate the country so deeply. The page on Wikipedia about Luxembourg’s languages is an interesting read.

It was good to see a little-spoken language taking such pride of place in the national consciousness, and while it wasn’t such a visible language to the weekend visitor it was still a truly national language, something felt to be worth keeping, worth teaching and worth using. It’s an enviable position for anyone whose experience of minority languages includes marginalised and struggling languages like Gaelic or Welsh.

Sadly, I didn’t get the chance to sing anyone “Happy Birthday” all weekend.