While there is much good about Inverness, there are also many things that need sorting out.  Part of the problem is that in the past decade or so the city has mushroomed, with huge development and expansion that has entirely outstripped the pace of services and infrastructure.  One example is the fact that transport has lagged behind the city’s growth, with many communities ill-served by buses, and of course the eastern suburbs failing to be served by a rail line that runs right through them.

On the roads, too, things are not good.  With the growth of the city, capacity cannot keep up with demand.  Years ago, a traffic jam was an alien concept, whereas today there are too many of them on Inverness’s main routes at rush-hour.

One long-discussed plan has been to bridge the canal and river at the south of the city to relieve the pressure on the city centre bridges, the current only options to get from the west to the east of Inverness.  Look at this map, for instance:

You can see the A82 on the left of the picture, running southwest to Fort William and beyond.  On the right, there is the A9 (to Perth) and the A96 (to Aberdeen).  The so-called “southern distributor”, marked as the B8082, runs across the south of Inverness, connecting all those major trunk roads and essentially forming a bypass.

Only there’s a gap – you can see on the bottom left that the southern distributor hits Dores Road and then stops, with nothing connecting it to the A82.  The completion of this gap is known as the Inverness West Link.  Of course, the Caledonian Canal and River Ness are in the way of finishing the link, and this means that if you are travelling from the southwest and want to get east of Inverness, then you need to go through the city centre rather than just skirt the edge of the city via what would be a convenient bypass.  The obvious solution would be a bridge.  Any vaguely intelligent person can see that.

Obvious (or intelligent, for that matter) does not come into the thinking of Highland Council, however.  This bridge has been discussed for years, and finally a consultation was launched last year about a number of options for this missing link, none of which included the obvious route for a bridge and all of which involved a bizarre collection of routes that doubled back towards the city centre (thereby defeating the purpose of a bypass), and most alarmingly carving up Canal Park.

Only after considerable protest was the consultation extended to include more options, one of which, option 7, was the obvious idea of a bridge directly from the southern distributor to the A82.

Have a look at the map above again, and you can see that where the canal and river almost meet each other, there is a green triangle of land called Canal Park.  Zoom in, and ideally switch to satellite mode, and you’ll see more of it.  It’s a marvellous oasis of green in a busy city and a home to a variety of sporting and other leisure activities.  There’s a lovely wee lake with boats, there’s a children’s play park, a miniature railway, plus of course the city’s main leisure centre, and pitches which are the homes of Inverness’s rugby and American football clubs.

And yet it is right through Canal Park that all but option 7 would plough. And it is one of those other options, option 6, that has emerged from a council working group as the preferred option for the full council’s consideration.  Compare the two options on the right (and if these images aren’t clear, find them among the presentations here on the council’s website.

You can see that option 6, rather than crossing the river and canal together in a single bridge, sweeps northwards and crosses over into Canal Park and from there crosses the canal next to the existing Tomnahurich Bridge.  You therefore need to go almost into the city centre again to come back out – of course, cutting across that once-green space of Canal Park. 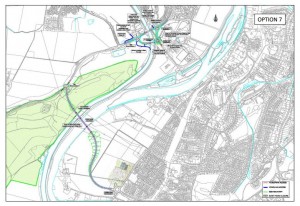 Compared this to option 7, which does nothing more complicated than take a direct route over the canal and river in a oner.  It looks from the picture on the right that it cuts across green space, but that is in fact nothing more environmentally worthy than a disused quarry.

The working group, as I say, has gone for option 6.  What a terrible choice to make.  You don’t have to go far to find condemnation of this, with almost every comment you could find on the internet criticising the short-sightedness of this decision.

Of  course, option 6 is cheaper.  Considerably so.  There is, it is claimed, no money in the coffers to pay for the high-level bridge of option 7, especially since the Scottish Government a few years back mysteriously washed their hands of the west link by claiming it wasn’t important enough to qualify for central funding.

But because of the destruction of Canal Park, doing nothing is actually better than implementing option 6.  For sure, the traffic problems will remain and the west link will remain uncompleted, but this is better than losing the green space at the park.  It would be much better for the council to implement no option at all, hold option 7 as a prospective plan, and do whatever it can to lever money out of the Scottish Government (our local MSP is a minister in the SNP government, after all) or even, if necessary, the private sector.

And option 7 doesn’t even need to be as expensive as it is claimed.  Part of the plan for option 7 involves an extra bridge at Tomnahurich (so if one has to close for canal traffic, there is always another open).  Great idea, but not so urgent at this stage.  Why can’t option 7 be costed and implemented with the extra canal bridge to be installed at a later date when there is more money?  There’s no need to ruin Canal Park just because of some poor bean-counting. One argument in favour of option 6 is that it will not actually destroy the whole of the park: as you can see, it merely cuts along the edge of it.  But that’s enough of an impact for some facilities to be lost and for others to be disrupted by the constant noise of a busy road.  This presents safety issues for what is supposed to be a family-friendly open space for people to be free to run, walk, play and enjoy the fun of exercise, sport and relaxation.

Moreover, the lovely walk along the thin slither of land between the river and the canal, which takes you a few miles south to Dochgarroch locks, would be made all the trickier for having to cross what is in effect a bypass in order to reach it.

I don’t really get involved in much in the way of active politics these days, but I am absolutely furious at the decision to recommend option 6.  It is desperately short-sighted and will have a terrible environmental impact on Inverness.  I’m also somewhat concerned at the lack of recent activity from an action group set up to oppose anything other than option 7.

I hate being a “disgruntled of Tunbridge Wells” about things like this, but do feel increasingly angry at the terrible decision-making we are subject to.  And to be honest, I don’t even spend that much time at Canal Park – imagine how much more angry people will be who do go there regularly with their children, or who are involved in the clubs that will be affected.

Disgruntled or not, though, I am going to write to my local councillors, to those involved in the recommendation, and to my MSP.   I’ll keep you posted as to any responses.