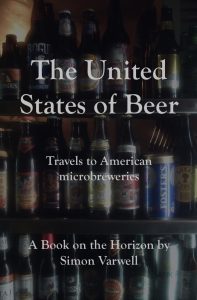 The United States of Beer: Travels to American microbreweries.

Yeah, I know, the title’s rubbish. But I can’t for now think of anything better.

We all know about the big famous American beers. But only lately are we in this country getting more aware of the USA’s tremendous microbrewery output. It’s time to get beyond the Budweiser and explore some proper American beer.

If you’ve read my second book, you’ll recall that an occasionally recurring theme to the American leg of my mullet-hunting journeys was the revelation that was the USA’s little-known (at least on this side of the pond) tradition of microbreweries. There’s a bit about it in this free extract of the book.

I’ve often cast my mind back to the USA trip. The places, sights, tastes and experiences really stuck with me from that trip and I’d love to go back. The beers, particularly, were a highlight, and having tried a few more US craft beers in recent months thanks to their increasing presence on British shop shelves, I have an idea forming.

I fondly imagine that, in the tradition of great American journeys, a road or rail trip right across that vast country would be a great way to explore some of its iconic locations, famous cities and quiet, forgotten backwaters. With cheap fuel and big roads, it’s almost like the USA was built for road trips. And I’d love to do one with beer at its heart. If the very few microbreweries I enjoyed in that trip up the west coast is anything to go by, there will be plenty more to find, each unique and distinct, and most little-known beyond their locality.

It is easy to think of the big brands and global corporations that dominate the USA (and, sadly, much of the rest of the world). And therefore it would be refreshing to bypass the big beers and seek out the little guys, the microbreweries that defy the tide of naff mass-produced beers.

I’d especially hope to get off the beaten track – I took away from my last USA trip a love of big, empty spaces – of deserts, small towns and isolated tracks. Having done the west coast and also in 2000 visited New York, my instinct would be to stick to the middle, avoid the big cities, and explore the sort of America that doesn’t often hit my radar: the wild, the run down, the sparse. Just as long as there’s a good microbrewery nearby.

I mentioned the iconic American road trip above. Perhaps, with beer at its core, this book would be better undertaken by train and bus. The car-loving USA is not known for its sterling public transport, so that could make the journey tricky, but actually that might be part of the appeal – heading into less-connected areas using only public transport (or maybe hitching) would slow me down, focus the mind on the here and now, and allow for a gentler pace and a deeper dig. And hopefully many opportunities to stop for a beer.

I’ve written about the USA before, and loved it, and am writing about beer for my next book. This would combine the two. I’ve already written another Book on the Horizon about beer – Anything But Guinness – and perhaps this would be a sister title.

A great journey across a great country, tasting some fantastic beer, and discovering some curious stories among the back roads and backwaters of lesser-known corners of the USA.

A lot of research! I’m aware I’ve so far basically said that I’d like to visit some US craft breweries, and probably avoid the coasts. That doesn’t enormously narrow things down in a country thousands of miles across. I have no further hooks or themes, and have done no digging into the fun or unusual stories that I am sure can be found in the American craft beer movement. So putting out some feelers and doing some reading would certainly help me get a sense of where I might go.

And that links to time and money. If I do more research I can plan a decent itinerary and efficiently pack a lot in. If I do less then I’d need to follow my nose, and while that would be immensely liberating it would also take a lot more time and cash.

I’d imagine a month of well-planned travels would allow me to take in perhaps a dozen locations. A couple of months – who knows, maybe more? – could give me a bit more flexibility to explore at whim. That latter option is so much more enticing, and I think it would be a book that dwelled much more on the experience and my reactions rather than a the simple structure of an itinerary – a journey rather than an itinerary – but would invariably be pricier.

If you paid me to do this book, I’d struggle to imagine making a good go of it for less than two or three thousand pounds.

As with the partner book Anything But Guinness, the answer is “not very”. I am immensely motivated by the idea of a lingering, meandering journey through the diverse interior of the USA, and visits to craft beers I’ve never heard of, but it will be a big, expensive trip that will require a lot of research.

This is a trip that wouldn’t suit distinct legs I could do one at a time. This is a single, integrated, grand adventure. And that requires more time and money than I could imagine having for the foreseeable future.