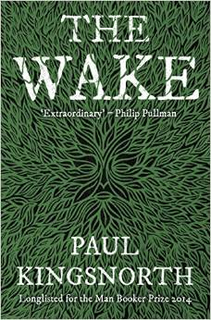 Now and then, a book pops up that is extraordinary in its nature, subject and style – a true original. And The Wake, by English author Paul Kingsnorth, which I finished a while back, is one such book.

Taking those three points of extraordinariness in turn, the nature of the book is that it was originally crowd-funded. Asking people to commit to something financially in advance – a business venture, a book, a film or whatever – in return for various perks seems to be an increasingly popular way of doing things, but it requires a clarity and courage of communication to be able to do so. It was at this stage that I first became aware of The Wake, but what truly stood out for me was the other two points about it.

Its nature is notable because it explores a bizarre and little known subject matter. Now, we’ve all heard about 1066 – the Battle of Hastings, the great turning point in English history when the Anglo Saxon monarchy, government and way of life began to be supplanted by the invading Normans.

What’s less known about – and certainly I’d never heard of at all – is the decade or so of guerrilla resistance that followed, an ultimately futile fightback by the native Anglo Saxons to overthrow these invaders from France. And it is this period that Kingsnorth writes about, with an obviously enormous wealth of research and exploration going into bringing this little known period of England’s history to life.

The novel revolves around the experiences of Buccmaster, a man who loses his family and livelihood in the chaos that comes with the Norman conquest and who forms a part of that guerrilla resistance. Buccmaster is not only the main character of the story, but the narrator and – in many ways – the totality of the story itself. It is through his words, his gruffly spoken, inch by inch revelations about himself, his life, his family and the world that he knows, that we understand something of the apocalyptic loss and upheaval that the invasion brings.

And those words, the words of Buccmaster, are the third extraordinary thing about this book. Because for The Wake, Kingsnorth has invented an entirely new language. As he explains in a number of places, Kingsnorth felt that he couldn’t tell the story authentically in modern, twenty-first century English, a language that of course has been so irrevocably changed by the Norman conquest and which would, therefore, appear ludicrous in Buccmaster’s mouth. So instead, Kingsnorth created what he describes as a “shadow tongue”, a kind of modern, comprehensive rendering of the Old English spoken by the Anglo Saxons of 11th century England.

That in itself is a tremendous achievement, not only researching Old English and updating it while avoiding as many French or Latin influences as possible, but also refining and using that language in a way that is comprehensible, flowing and truly like a living language. The Wake, due to that unique tongue, is a tough read. It’s slow going, though rich and atmospheric, as the excerpt on the Unbound page shows. While there is a glossary at the back I found myself using it less and less, ignoring words I could not understand and instead just allowing myself to be immersed in the shape and feel of a language that was both utterly alien and yet so familiar.

While obviously there is plenty modern English in Kingsnorth’s “shadow tongue” (it’s strange, but it’s not truly impossible to follow once you get into its rhythm), any knowledge of Scandinavian or Germanic vocabulary – or even any grasp of Scots – will certainly help. For me, reading The Wake aloud in my head helped, and as I chewed over these words in my head, I found myself giving Buccmaster’s narration a curious, slow, muscular accent that I suppose was a mix of Shetlandic and a cliched “oo-arr” Somerset drawl.

It’s a tribute to Kingsnorth that I can write so much about the book without even yet touching on the story, but yes, there is one.

Buccmaster, a man of not immodest means – he owns some land and livestock, appears to be respected in his community, and has men working for him – lives in the Lincolnshire fens in the eleventh century. He is a man of great skill and craft, admirable work ethic, and deep connection with his land. He regularly has dreams and visions that have their roots in the ancient Anglo Saxon gods and myths, legends forged long before the strange foreign Christ whose influence is strong in Buccmaster’s England, much to his deep scepticism. But he is a man of short temper, frequent poor judgement and appalling morals, as the gruff narrator slowly begins to reveal more about himself and reflects more on the messages he feels he is getting from his forefathers.

Indeed, those dreams and visions become more intense as the story opens, making Buccmaster fear that something ominous is coming. And coming it is, as the Norman invasion gets underway. It’s no spoiler to say that Buccmaster loses everything dear to him, because the story really picks up and comes to life when he assembles a group of men to form a part of the decade or so of rebellions against the invaders.

And neither is it a spoiler to say – indeed, the Norman influence over England testifies to the fact – that Buccmaster’s contribution to the guerrilla war ultimately fails, and it is this inevitability of loss that casts a powerful shadow over the book. As his strength fades through the book, so Anglo Saxon England’s language, culture, ways of life and connection to the very land the Normans now trample, fade also.

Buccmaster’s continuing visions and meditations on the England he is losing and the England it is becoming are one of the key aspects of the book, and it reflects themes that are important to the author.

If you poke around Kingsnorth’s website, you find a fascinating, almost paradoxical thinker. He could on the one hand be on the radical left – deeply sceptical about capitalism, globalisation and the exploitation of common people – but also on the right in terms of his rejection of state control and his fervent belief in the centrality of individual liberty. There is also a strong environmental ethos in his writing, and also a deep love of the culture that manifests itself through our language, customs and even our land.

And those themes come over strongly through Buccmaster, who you can’t help wondering is not just the book’s narrator but also Kingsnorth’s spokesman. Indeed, Kingsnorth movingly confesses in this this superb interview – well worth a read as it comprehensively sets the scene for The Wake and what it aims to do – “I’m not sure I’d have the strength to deal with him [Buccmaster] again. On the other hand, I rather miss him.”

Mind you, don’t mistake The Wake, or indeed Kingsnorth’s manifesto, as some sort of grumpy, ultra-conservative traditionalist, angry at anything resembling progress. Though he has revealed that he voted Leave in the EU referendum (see his views in an earlier article here), his politics is more complex than simple UKIPism. He is also a committed environmentalist, a strong believer in the power of communities, and deeply sceptical of authority of any political shade or any level that infringes on humanity’s ability to flourish in its own domain – including to an extent the internet. His website’s “occasionally asked questions” page is well worth a read to get a flavour of the author.

Like Buccmaster, I find Kingsnorth a fascinating individual. Deeply creative, intensely intelligent, and no doubt I’d find him superb and compelling – if somewhat infuriating – company.

But it’s company that, in the literary sense, I will keep for some time. The Wake, it turns out, is just one part of a trilogy that Kingsnorth is writing. That first part is set a thousand years in the past. The second, just released and on my to read list, is set in the present day. The third will take place a thousand years in the future.

Kingsnorth is nothing if not ambitious. And judging by The Wake, that ambition is matched by his amazing output.

The Wake is a strange book, perhaps the strangest I have ever encountered, and not an easy read. But it is engrossing, rich and well worth the effort.