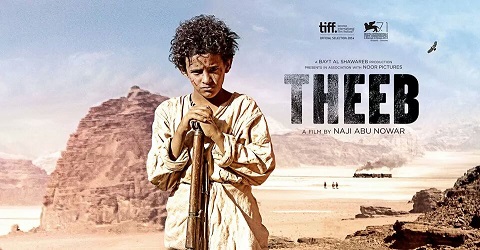 I went to the cinema for the first time in ages last weekend to see an Arabic-language film called Theeb. Set during the 1916 Arab Revolt in the Ottoman province of Hijaz (now part of Saudi Arabia), it is, frankly, not the sort of film I would naturally be drawn to.

However, it came highly recommended by a Twitter contact, the travel writer and Middle East specialist Matthew Teller, and I am very glad I went. It’s a slow, tense, minimalist film, in which the wider context beyond the narrow horizon of the film’s story presents itself subtly but hauntingly. I came out of the cinema having very much enjoyed it, but now, a few days later, know what Matthew meant when he tweeted to me that the film had been “ringing in my head for months”.

The film tells the story of a young Bedouin boy named Theeb (meaning “wolf”) who joins his elder brother on a journey across the unforgiving desert. Recently fatherless and from a family of guides, their occupation of escorting people eastwards on pilgrimage has been supplanted by the new Ottoman railroad. They return to guiding, however, when a British army officer and his Arab associate appear unexpectedly in the middle of the night on a mysterious mission. As is their experience and custom, the Bedouins send Theeb and his brother with them on a journey through what was once the pilgrimage trail but is now, thanks to the railway, abandoned to bandits.

Needless to say, the journey doesn’t go quite as planned, and Theeb is left in challenging company and circumstances. It is, in a sense, a classic coming of age drama, but – set against the bleak desert surroundings of Saudi Arabia and the backdrop of World War 1 – it is unlike any I’ve seen before.

A couple of reviews I’ve read use the film genre “western” to describe it. I don’t know why things produced in the Middle East need to fit in to a white, westernised pigeonhole. That said, the film’s Jordanian director and writer uses the phrase “Arabic western” himself in a very helpful and revealing interview, and I do see the point of the comparison – Theeb contains much of the western genre’s forbidding scenery and long, tense pauses, plus the classic set up of a triangular battle against both an enemy and the unforgiving natural elements.

It is in this battle that the film’s tense plot is played out superbly, with dilemmas over trust, uneasy alliances and the instinct for survival, all reinforced by the breathtaking scenery, beautiful soundtrack and superb acting. Nearly all the actors in the film were amateurs from Jordan, incidentally, and the boy who plays Theeb – not least in his body language and facial expression – absolutely carries the film.

But what also stands out and lingers is the context. While most of us in this country won’t profess to know much about the Arab Revolt or World War 1’s Middle East arena, we probably have heard of the exploits of T E Lawrence. “Lawrence of Arabia” was, of course, one of many experts sent by the British Army to support the Arab Revolt against its Ottoman enemy. When we see, in Theeb, an explosives detonator, there is a strong echo of one of the most famous parts of the film “Lawrence of Arabia” when the titular hero attempts to blow up what I assume is the same train line as that featured in Theeb.

Further strong hints emerge throughout the film of the Arabs being caught in the political and military battles between the British and the Ottomans, the dying of an old way of life in the face of technology, and the endurance of people – individually and collectively – against such threats.

It’s not a part of the world – or a period of time – I know much about, but the little clues and nods in the film about the wider history and culture have left me with lots to think about and a desire to explore it. That, for me, is the mark of a very good film.