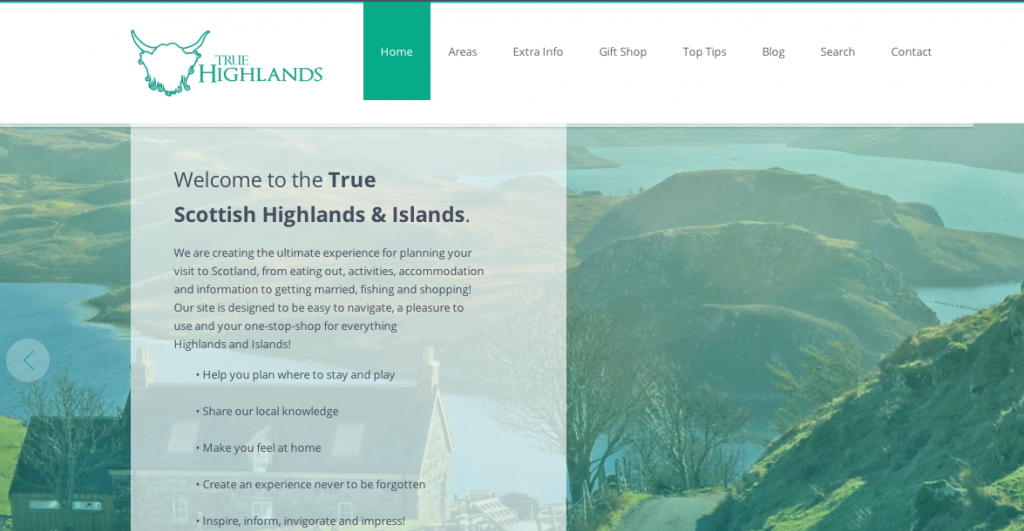 I was intrigued a while ago to stumble across plans for a new tourist information website for the Highlands called True Highlands.

Admittedly, I was sceptical when I signed up for updates. It’s notoriously hard to express everything about the Highlands in a manner that is full, engaging and not tired or cliched. And, I must confess, the last Highlands tourism site I reviewed got a bit of a beating.

But when I got notification that True Highlands had had a “soft launch” (instant brownie points for not using that horrible techie term “in beta”) and I had my first poke around, I was impressed.

Although True Highlands is fundamentally a business directory, it is presented to the user as a guide to the sights and attractions of the Highlands and Islands. The region is roken down into small, meaningful areas, and each of those then has the same set of subcategories. These include unsurprising ones like shopping, eating and accommodation, but also less obvious ones like whisky, beaches and lochs, getting married, and emergency information.

By using such detailed categories both geographically and thematically – while keeping the site as a whole admirably simple and uncluttered – it means that each page is specific and meaningful. I can imagine someone planning a trip using these pages in a very practical way, getting useful information rather than tartanesque, shop-window-kitsch marketing patter.

Of course, the site is not properly launched yet, so at the time of writing some of the pages are laughably bare. But there’s every sign that they’re working on that, and so one can hope and assume that by the the time of launch the directories will be properly busy with lots of interesting options and ideas. Though given True Highlands is dependent on local businesses signing up to advertising their services, its value to the industry (never mind tourists) is thus far not fully proven.

But there’s more to the site than the directory. For instance, the “top tips” section is handy. It tackles a huge range of the presumably commonly asked questions, accommodating some tired cliches such as kilts and midges but also some good questions around practicalities like swimming and camping in the wild, mobile reception, and genealogy. Again, these are the sorts of questions you can imagine people asking, and I learned one or two wee things myself flicking through the answers.

The blog section certainly avoids schmaltzy cliches and provides some interesting wee articles, with the few so far published outlining school holidays on a budget and a recipe for Cullen skink. It also looks like they’ll be using the blog to showcase the lives and work of some of the small businesses featured in their listings. That’s a refreshing alternative to the top-down, light-touch overviews you often get with tourist guides.

That, I am guessing, is because the site is based in the Highlands and Islands and written by people from here. While I must declare an interest here and state that I have met the web designer who made the site, I certainly don’t know anything about the people behind True Highlands itself. However, the contact address is Dingwall and so this is obviously something dreamed up independently by people in the region rather than, say, coming from a brainstorm at VisitScotland (whose website, I’ve heard from several quarters, is loathed by local businesses for a number of reasons) or a generic, global travel brand applying the same model they use elsewhere.

Tourism in the Highlands is a tricky beast to comment on. While we have some of the best natural environment in the world, marketing of it can often be either cliche-ridden or amateurish, with meaningful and useful information hard to come by. Plus, it’s a struggle – especially when you’re a cynic like me – to be positive about the often appalling standards of service, the embarassingly poor transport infrastructure, and the lack of decent facilities outside main population centres.

So any attempt to portray the Highlands positively for tourists is always going to involve at least a little bit of polishing a turd, if you’ll excuse the expression. But that’s not to say that there is nothing worth making a song and dance about, or that there are no success stories, and no world-beating reasons to come here. And when what positives we do have are put in such a good light, it’s an inspiration and motivation to aspire for high standards and look to develop new things that can give visitors a good experience.

That, I think, is what True Highlands is achieving in its early days. The site is clearly a work in progress and there’s much still to do, but it really does present the Highlands and Islands in a positive and exciting light, not least through the imaginative “something different” page. True Highlands actually makes me feel not a little pride about the beauty and diversity of the region. What’s more, it’s a practical, useful site that you can imagine providing a real basis for planning a holiday. Here’s hoping it continues to grow and to fulfil its obvious potential.