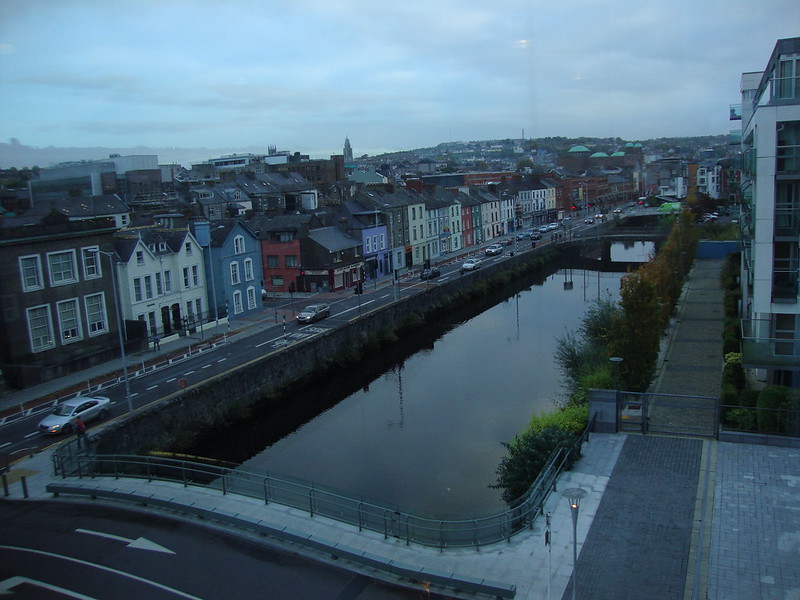 Thanks to work, I had recent cause to visit Cork, a city in southwest Ireland and the Republic’s second largest settlement. Ireland is not a country I know well, having spent only a week or so there in adventures you can read about in my first book.

However, my trip to Cork was frustratingly short, and in the space of a bit less than 48 hours I saw very little beyond the insides of a few taxis, two restaurants, one hotel and some meeting rooms. And the above photo of Cork’s very pretty riverside is, I think, the only decent one I took.

I ought to return, because – if my scant prior research and the admirable positivity with which folk I met described the area are anything to go by – there is plenty to see. Cork is apparently a fascinating and beautiful city, and one with an important part in Ireland’s history, being as it was one of the last strongholds of the anti-treaty (ie anti-partition between the republic and Northern Ireland) forces in the post-independence Irish civil war.

The city also boasts an important harbour, and is the home of the Irish navy (insert joke here about two rowing boats and a pedalo). The coastline of the surrounding area is, I was consistently told, well worth an explore on a return visit. Though I think the biggest draw for a trip back would be perhaps one of the most unusual and potentially quirky museums I’ve ever heard of – the Cork Butter Museum. Hopefully I’ll be able to churn out a blog post on that in the future.

As with all such rushed work trips, therefore, my on the ground impressions were significantly shaped by those dependable universal barometers – taxi drivers.

In the handful of taxi journeys I took, the conversations were pretty consistent in content, and each driver brought up three common things.

First, there was a huge jazz festival coming up that weekend, the day after my departure. I was, apparently, leaving at precisely the wrong time and would miss all the fun. In each taxi I was too polite to mention that, as someone who hates jazz, I would be leaving at precisely the right time. And even if I loved jazz, I had an even better excuse – I was due to head straight from Ireland to Armenia.

Second, they all asked about shinty upon my mention that I was from Inverness. The combined rules shinty-hurling international is a big deal for the Irish, it seems, though frankly anything to do with hurling is a big deal there. Ireland’s love for the game puts Scotland’s love for shinty to shame, and I had to confess in response to drivers’ questions that no, despite being the Capital of the Highlands, Inverness wasn’t much of a hub for shinty and to the best of my knowledge Inverness’s team wasn’t even in the top division.

Third, they all asked about the independence referendum. I was surprised that the topic was brought up more as enquiry than opinion, assuming (rightly or wrongly) that most Irish would have been supportive of the idea.

Indeed, independence was at the back of my mind on my visit, as I was able to see a little bit of how Ireland felt as a small independent Celtic nation just a year or so after our referendum. Obviously Ireland has not had its problems to seek in recent years, and the economic collapse there has been written and talked about widely here in Scotland, never mind in Ireland. I had to laugh when in the in-flight magazine on my plane over to Cork I read an article about someone who had returned home to Ireland “despite the economy”. Not “despite the poor economy”, just “despite the economy”. As if “the economy” was now so bad it was an inherently a negative concept.

But there were some positives. My overall impression of the country was a place that was warm, friendly, outward looking and welcoming, a place proud of what it was and where it had come from. And let’s not forget that there have been no calls post-crash for Ireland to turn back on its independence.

And while broadcasting was one dimension to the vote in Scotland, it was interesting to watch the Irish broadcaster RTÉ to get a feel for what an independent broadcaster in a small country could be like. The news, especially, was enlightening. In an Irish accent, broadcast from Dublin, local, national and above all international news was presented, with coverage of goings on in a number of different countries, including a good report from an Irish reporter in Slovenia on the ongoing European refugee crisis. It was such a contrast to the enforced parochialism of BBC Scotland, where our international coverage is all through a London lens.

But I had little time to dwell on such political matters, as before I knew it my trip was over and it was time to go home. After a final chat about jazz, shinty and independence (plus my driver’s drunken night out in Wick twenty years ago) in the taxi to the airport, it was time to leave the country.

With an endorsement like that, perhaps I’d made the right decision after all.