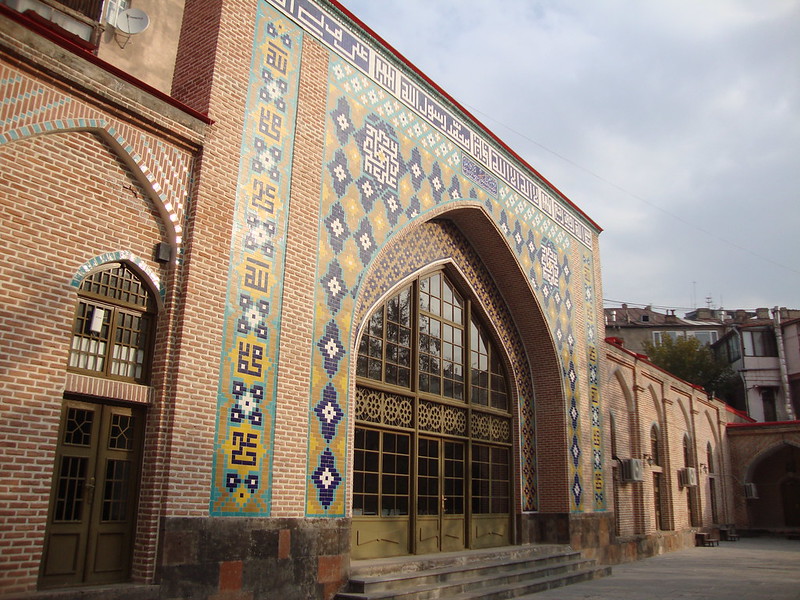 In a country with a long tradition of Christianity and a virtually homogenous population, you wouldn’t expect to find much in the way of religious or ethnic minorities. Indeed, other than some recent Yazidi refugees or the occasional Russian, Georgian or Iranian, there are few obvious non-Armenian communities of note. 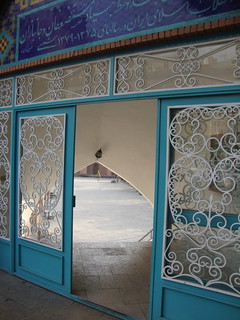 And in a country which has been in serious conflict with two of its three Muslim neighbours, you don’t perhaps expect there to be an Islamic tradition. But there is, of sorts. For much of its history Armenia has been fought over by Russia, the Ottoman Empire and Iran, and has at various times been a part of each.

It was during Iranian rule in the eighteenth century that Yerevan’s beautiful Blue Mosque was constructed.

Realising that this, Armenia’s only mosque, was relatively close to my hotel I paid what I thought would be a quick visit en route to catching a bus somewhere else, but it turned out to be quite a deep and interesting tour.

Stepping through the slightly unassuming entrance on a busy street, steps lead down into a tranquil open interior, with the Blue Mosque itself at the opposite end of the square.

It looked like nobody was around until a middle-aged woman approached and warmly greeted my travel companion and I in English, and introduced herself as the guide. We were, it seemed, to be taken on a tour. 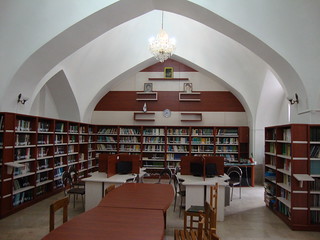 We began with with mosque’s library and study space, a modest, modern space filed with a variety of books and overlooked by a portrait of the past and present Ayatollahs.

There we received a little bit of background to Iran and Islam, which assumed virtually no knowledge of either on our part and yet left no time for questions.

Iran, we were assured, almost too pleadingly, was a warm, friendly, welcoming and diverse country with a great history of tolerance. The country had a large Armenian population, and many Jews, Kurds and others, she said, who all had full rights and equality in Iran (I didn’t ask how that was extended to the Bahá’ís). 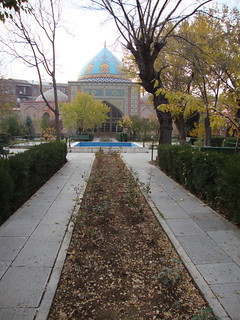 The mosque, the guide explained, had been built to cater for Armenia’s modest Iranian population, and she said that she herself had moved from Iran to Armenia in the 1980s. The mosque also hosted a number of religious events and conferences, and the city was home to a few students from Iran, studying at one of the city’s many universities.

We were then taken across the quadrangle, past flower beds that had seen better days, to the mosque itself, whose blue dome gave it its name. We were ushered in, knowing to first remove our shoes, and took in the serenity of the men’s prayer hall.

It was a beautiful interior, with immaculate carpets and impressive stained glass windows. The peeling paint on the walls, however, indicated that this was a place that did not quite receive the attention it should.

Whether the slightly weathered feel was due to insufficient ongoing investment from the Iranian government or the efforts of the presumably very small Iranian community in town, I was unsure. Perhaps it was both. 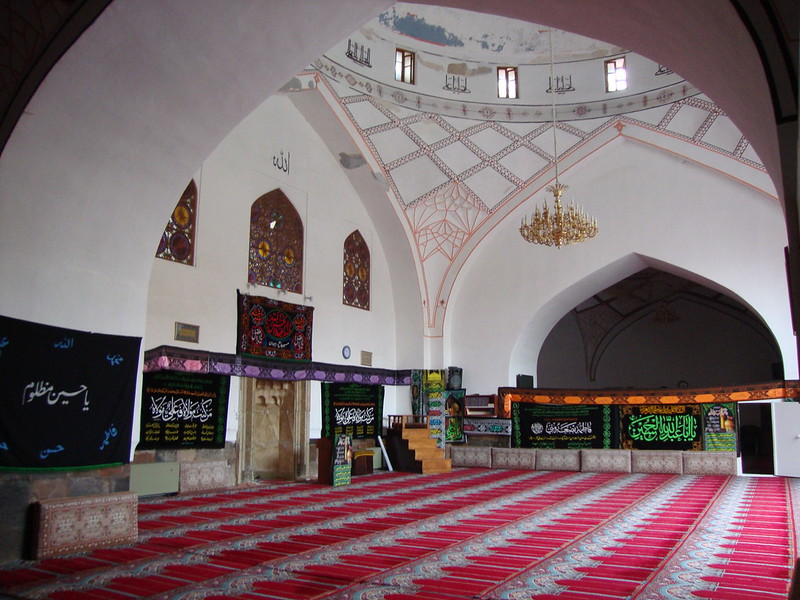 Our guide, who had waited outside while we looked at the prayer hall, didn’t let us linger. We were on the move again, to a final spot, an exhibition hall containing various photographs of mosques across Iran, an Armenian genocide memorial somewhere in Iran, and various scenes from Armenia’s past.

As we went in the guide’s phone rang, and she stepped outside to take her call before we could ask her any questions.

She returned just long enough to say goodbye and thank us for our visit, and to say that if we could spare a little money to pay for the tour we’d not explicitly asked to be taken on then she’d be very grateful. To be honest it had been interesting so we were glad to do so, and as we did I asked a couple questions. I can’t remember precisely what I’d asked, but she said in one of her answers that she was not in fact Muslim herself – she was an ethnic Armenian Christian, and merely helped out at the mosque.

With that, she was off – leaving us to wonder whether there really were any Iranians in town after all who could make this mosque a real place of community and worship.