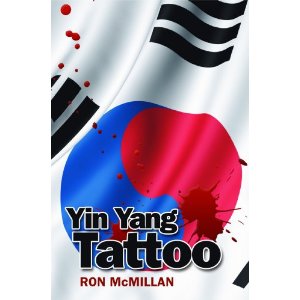 I promise I’m getting to the end of my list of book reviews.  The other night I finished the last item in my current “to read” pile, so I’ll have to find something else to blog about soon.

My penultimate review for now is Yin Yang Tattoo by Ron McMillan.  Now I must declare an interest here: Ron is a fellow Sandstone Press author with whom I have frequently corresponded (he lives in Bangkok), and it’s actually because of his previous book that I got Up The Creek Without a Mullet published in the first place (read how that happened here).

But if this review makes scant criticism of Yin Yang Tattoo it’s not a response to any camaraderie with Ron or the knowledge that he will read this review – I am sure he can take criticism on the chin! – but rather that there is little to criticise in this fast-paced, entertaining thriller.

The story’s main character is Alec Brodie, a hard-drinking Scots photographer who is invited to South Korea – where he previously lived and worked – for an assignment that turns out to be a cover for all sorts of dodgy shenanigans.  Framed for a murder he did not commit, Brodie is forced to unravel the truth of what’s going on while on the run from the authorities, relying on his wily intuition, his knowledge of the country, and not a little grit, determination and luck.

Gritty crime novels like this with a range of rough and curious characters and numerous twists and turns in the plot are not normally my cup of tea, but I certainly found Yin Yang Tattoo to be engaging, with each chapter ending compelling you to read on, and the story kept vibrant by the exciting plot, great characters and vivid portrayals of South Korea’s highlife and lowlife.

For sure, some of the characters seem almost pantomime-like, because it’s easy to know who you should be cheering and booing as there’s little to hate about the good guys and little to like about the bad guys.  But that didn’t bother me, because the book as a whole, including for instance the South Korea that Ron portrays, is full of the extremes of good and bad too.  And the book really does give a rich description of the country – all sorts of seedy nooks and crannies as well as plush, rich areas in Seoul, the countryside, far-flung rural corners… this is a book that gives us a good sense of what the country is in terms of its diversity, its beauty and its relationship with its odd neighbour to the north.

In that sense, the book is a packed and diverse one – we have romance, sex, detective work, violence (I did wonder why in one dramatic martial arts fight scene nobody just thought to bring a gun, Indiana Jones-style), humour, and much more.

Our central character, Brodie, is likeable and much of his past, his attitudes and motivations are explained, but not so much so that the reader is fully satiated at the end.  Brodie has either unfinished business or a motivation to keep exploring the region at the conclusion of the book.  So I’m guessing that means there’ll a sequel or two in the future, and I am looking forward to seeing them.

One thought on “Yin Yang Tattoo, by Ron McMillan”