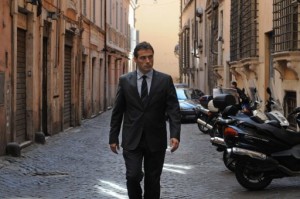 Recently, I’ve really enjoyed watching Zen on the BBC iPlayer, a series of three dramas about an Italian detective.

It is an adaptation of a series of books by the late Michael Dibdin, the detective Zen being his most famous creation – though I’d heard of neither writer nor character before.  To start with, the programme seemed slow and a little stilted, but a gorgeous visual feel, subtle humour exciting plot twists and brilliant acting made it very enjoyable in the end.

The main character, a forty-something divorced Venetian policeman called Aurelio Zen, played by Rufus Sewell, is a hard-working and unusually honest man, envied by his colleagues but noted by the government minister for his abilities.  Finding himself in challenging and dangerous cases, he inevitably comes up trumps with a mix of determination, shrewd resourcefulness and a very clever mind.

Shot in and around Rome, in a slightly washed camera feel to make it seem a little 1970s, the show is visually very impressive, with delightful shots of bustling Roman backstreets or scenic countryside, but its attempt to paint a realistic portrait of Rome is let down slightly by its ambiguity towards the expectations made of viewers to suspend their disbelief.  Zen is written and filmed in English, with mostly English actors, but the viewer is a little disorientated at times by the mix of languages in the background.  One minute we see newspaper headlines in English, the next we hear a TV in the background unmistakeably broadcasting Italian; most actors have very conventionally English accents yet we are thrown by a couple of key cast members being English-speaking Italians or by background conversations being in Italian.  In one scene that sums the problem up, a tram trundles by with an Italian destination on the front but an English advertisement on the side.

While either option would be fine (either completely Anglicise it, or shoot it in Italian and offer subtitles), to try to do both damages the show’s cohesiveness.  Detective Zen’s important scenes with the government minister’s slick, almost “Yes, Minster”-esque chief adviser feel more like the dialogues you’d expect  between 007 and M (more on which later); while Zen’s gruff, overweight, plain-speaking boss is a stereotypical northern copper straight out of Life On Mars rather than anything remotely quintessentially Italian.  Sewell calls his character’s mum “mama” in a highly Italian intonation and drinks typically small shots of espresso as if it’s how he’s done it all his life, yet he sounds like he’s straight out of Middle England (which, indeed, he is).

Zen of course is not the only TV show to be written in a different language from the country it is set in (Wallander‘s remake springs to mind for instance, though I’ve never seen it), and I am sure I’ve seen plenty that do that; but none from my recollection seem so indelibly torn between the languages of setting and broadcast as does Zen.

I don’t want to criticise too much, though, as this major flaw is inevitable in a cross-language adaptation, at least to an extent; and in any case is significantly outweighed by Zen‘s many redeeming features.  It’s well-acted, there are a number of neat sub-plots concerning detective Zen’s colleagues, his family and his love life, and the twists and turns in the storylines are brilliant: just as you think Zen is out of his depth, he calmly pulls something incredible out of the bag and saves the day.  The great stories – rich and full, yet not quite fast-paced enough to stop being an easy watch – make me wonder whether I might like to try out some of the books.

Much of this appeal depends on the convincing and compelling performance by Rufus Sewell in the lead role.  Not an actor I’ve seen before, he is perfect for the role of Aurelio Zen.  His cool demeanour, his suaveness under stress, his ability to be both poker-faced and yet betray humour or emotion with the slightest of facial movements, and the wonderful way he delivers droll one-liners (for instance, to an armed criminal: “I know this is a bit of a cliche, but… you’re never going to get away with this”) make him an assured actor.  Indeed, there’s something of the James Bond about Rufus Sewell, and if ever Daniel Craig moves on, then he’s your man.

There are a great many more Zen books than the three episodes that were made, so with any luck there’ll be more to come.

And for those who read the title of this post and expected to find some form of Buddhist enlightenment, or perhaps even discover a thing or two about motorcyle maintenance, then you have my sincerest apologies for the let-down.