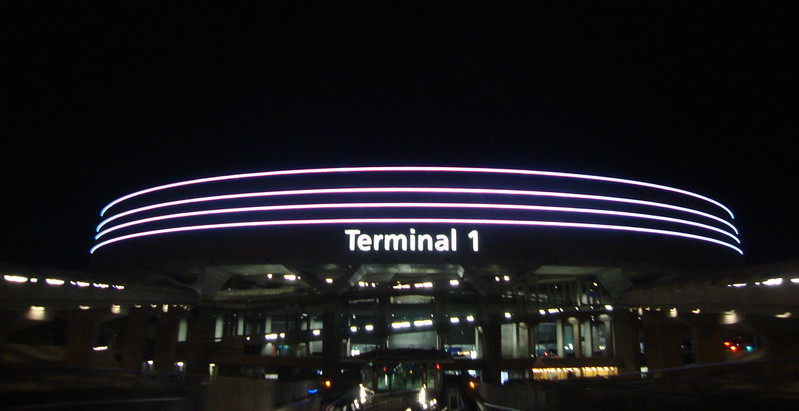 Airports usually look and feel the same to me. Not that I necessarily dislike them. As I often say, I prefer them to railway stations as places to explore and spend time. That may be surprising given I’m more a rail buff than fan of air travel, and yes airports can be easily described as bland, samey, monotonous and filled with a numbed transience of humanity.

But despite that blandness, airports are generally comfortable, warm, quiet, easy to navigate, good for people-watching, and – in the case of major international airports – a wonderful reminder of the world’s ethnic and lingustic diversity.

That said, I’m aware aware that some big airports out there have better reputations than others – better organised, more pleasant to spend time in, easier to reach by public transport and to find your way around, and so on.

One airport that frequently gets a bad rap is Charles de Gaulle airport in Paris. From stories of woe about lost luggage to an apparent dearth of facilities or character, CDG appears to get more than its share of criticism, compared not only to the supposed jewel of major international airports, Amsterdam’s Schipol, but even to other much-criticised airports like Heathrow. It can’t be that bad, I would often think – it’s just an airport after all. How bad can an airport be?

I had the chance to find out for myself in October last year, when I found myself in between trips to Ireland and Armenia not only needing to pass through CDG but to spend a night there. Eschewing the chance to hit the centre of Paris for the night, I instead decided that this was a perfect chance to explore the airport in depth and try to find out what it was really like. 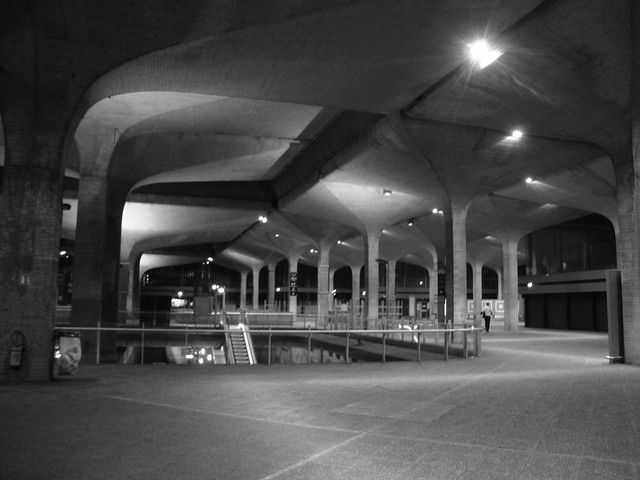 And you know what? It wasn’t that bad at all. In fact, it was actually quite enjoyable and I’d go as far as to say that spending a night at an airport is a wonderful chance to relax, recharge and reflect.

It’s no holiday hotspot, for sure. My hotel room, which was barely a minute’s walk from one of the terminal buildings, was small, bland and functional. The walk was a jet-fuelled reminder that fresh air was an alien concept here, but if you can put up as I did with about twenty hours of air conditioning then that’s a vague improvement. 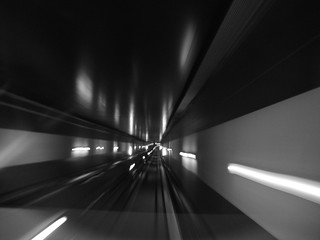 The various terminals and car parks of the airport are all connected by a linear light railway, and any airport that has a light railway gets serious bonus points (and several increasingly hyponotic and soporific rides from me).

I arrived mid-afternoon at the airport, and in between a bit of rest and work I undertook a number of gentle explorations. Over the course of the afternoon and evening the airport gradually quietened down.

It was never absolutely dead – even into the late evening there was always a sign of life somewhere – but there was certainly an increasing calmness, a sense of lull between the storms, of beauty in the emptiness.

With terminals descending into a brief nocturnal serenity, there was little to interrupt the reflections of bright signs on shiny floors, few souls to haunt corridors, and – for a some moments here and there – I felt alone at times, like this was my personal reality, my very own airport. It was a little oasis of quiet, a time to think, to not worry, to not feel like I needed to be anywhere or do anything or be enjoying myself or pursuing any particular objective. It was just a place to be. 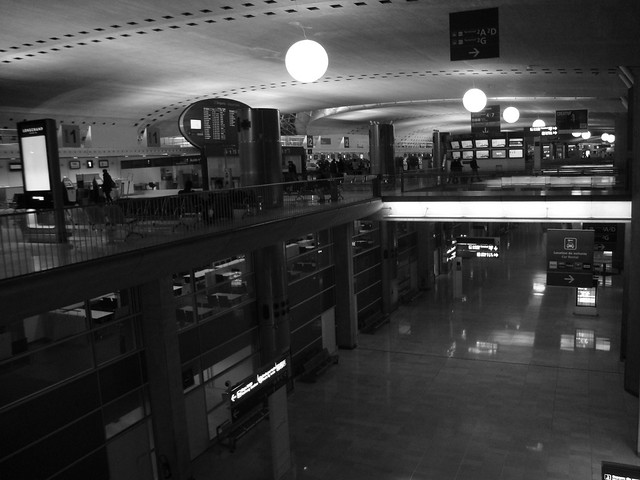 Charles de Gaulle airport is not beautiful by any means. It’s a poster child for concrete 1960s and 70s architecture, and the calmness and mostly late hour of my exploration meant that all my photos were black and white.

And as I scanned a departures board that seemed to be informing nobody in particular, I wondered where all the people were to justify all these flights. Though really, I thought to myself, for the few hours in which I didn’t need to be flying anywhere, this was a perfectly adequate destination in itself. 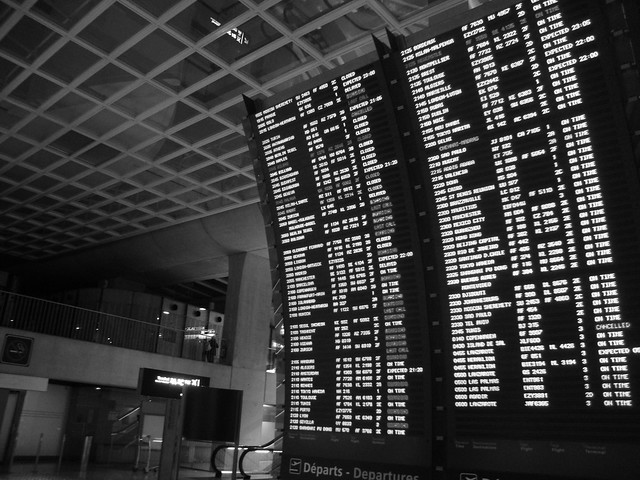