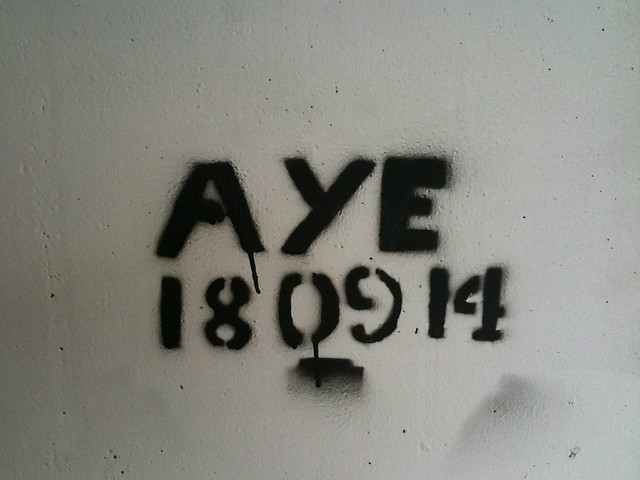 I saw a tweet about the independence referendum the other day. It said simply:

“Oh, it’s a horrible time to be in Scotland.”

I’m not linking to the tweet, or saying who it’s by, except to say that they’re a No voter. If you know who they are, don’t name them in the comments. It’s someone I greatly respect and who has made a phenomenal contribution to public life in Scotland – but I don’t want to draw them into a discussion, create a platform for criticism of them, or make them feel they have to justify views which, though disagreeable to me, they are perfectly entitled to hold.

In any case, what struck me was not the individual or why they chose to tweet those words. Instead, what lodged in my mind – haunted me, even – for a day or two afterwards was the insight it gave me into the mindset of committed No voters.

Call me slow, but suddenly, thanks to this one little tweet, it all fell into place. Everything emanating from the No campaign finally made sense: they don’t just dislike the prospect of independence; they’re absolutely f**king terrified by it.

Life must awful for No supporters. Everything they hold dear, everything they value, everything they can predict and regard as safe and comfortable is being shaken to the core, like the early tremors of a destructive earthquake. They can’t control it. They can’t stop it. What’s worse, when they fight back it is ineffectual and often counter-productive.

Conversely the Yes camp, whichever way you view it, has the momentum and the confidence. The polls are closing in, slowly but very surely, to an unpredictable finale. Yes are positive – as is the very nature of a campaign which is advocating, not opposing, a change. The excitement they generate amongst themselves and others as they re-imagine Scotland with flair, wit and creativity is infectious and self-perpetuating. Nothing seems to stop them.

It must be beyond disconcerting for No, because it shouldn’t have worked out like this.

No have most of the money. The UK’s four biggest parties. Captains of industry. The establishment. The tools of the UK civil service. Helpful comments from foreign heads of government. The media. No have the precedent, the status quo, and centuries of deeply engrained history, traditions and institutions. No created the devolution that was meant to end the movement for independence.

Everything that No folk accept as the established way of doing things will come crashing down. From the uncertainty over the constitution – not least that of the remnant UK – to the economy, to the military, to social cohesion and to our shared heritage and values.

Of course I fundamentally disagree with the fears they have about many of these things crashing down. That doesn’t stop me finally appreciating why they have those fears.

A “No” reading this may think – and I’d love a comment or two telling me if I’m right or not – that this strikes a chord. That this is precisely what they’re fearing.

A “Yes” reading this will dismiss it as scaremongering and the death throes of a tired old order that should have been swept away a long time ago.

But there’s no point arguing over it. Yes will not reassure No or assuage their fears through arguments, evidence, or reason. Nor vice-versa. Things are too entrenched, too emotional, too tied up with immoveable and irreconcilable world views to persuade No otherwise.

I don’t find that a reason to be concerned about life after a Yes vote. People’s terror won’t dissipate through argument but through experience. The proof of the success of an independent Scotland will be in the creating of it, the living of it. When people see a humane immigration policy; a constructive engagement with Europe; a peace-orientated military; a compassionate welfare system; an rich economy with scope for development and wealth to spend on infrastructure; a society that is confident, welcoming and outward-looking; an arts sector that can truly tell its own stories without fear; a polity freed from old habits to think radical new ideas; a constitution that enshrines the rights of individuals… when they see all these things and, most astonishingly of all, that they can control them, the relief will be palpable.

People will wonder what the fuss was about, and why we feared. Some enormously brave souls may even apologise for arguing it wouldn’t work (not that it would be dignified to expect or demand apologies). And some may even crack a reluctant smile at the emerging sight of a better world. But it will take those early days, weeks and years to prove it. Nothing comes easily. Least of all the road to Damascus.

So before the referendum, I’m not sure the fears of the No camp can be conquered. But for now, I at least understand something of why they’re scared. And just how scared they are. And while I still disagree with them, I can at least have a little more compassion for them. Because on the 19th of September they’ll be as much as part of the new Scotland as those who voted Yes.

And there will be work to do.

15 thoughts on “A horrible time to be in Scotland”