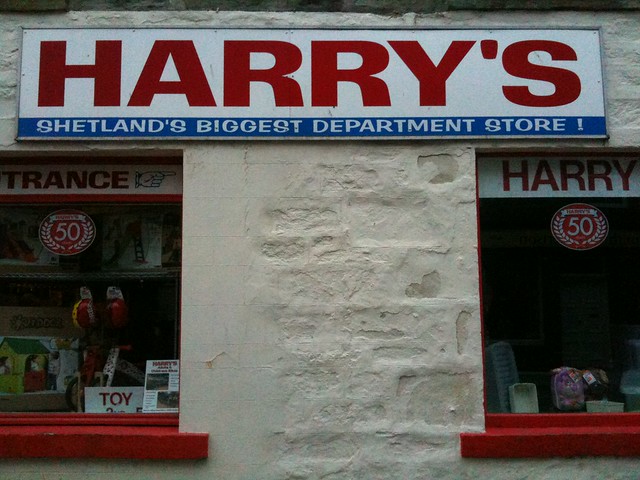 For some reason, I always tune into SIBC when my hire car hits the road from Sumburgh airport.

Descending out of the clouds to arrive in Shetland is always a slightly odd experience – the airport is at the very southern tip of the spindly peninsula that is South Mainland, the runway barely fitting in and even overlapping the main road. It means there are no glimpses of land, no low sweeps across surrounding areas as you come in; instead just a rapid, turbulent switch from cloud to sea to runway.

The landscape as you drive the main road north to Lerwick, too, is slightly odd. Green hillsides and blue sea on either side that, on most days, do a splendid impersonation of anonymous grey; a curious jumble of unimaginative architecture in the houses you pass; and the juxtaposition of barren, bleak countryside with evident wealth and prosperity. The signposts don’t just indicate placenames, but a sense of strange place – names that at once suggest Norse, Tolkien, and a high-scoring but useless combination in Scrabble.

SIBC, the island’s independent commercial station, is similarly paradoxical. Pumping out radio-friendly pop music you’d hear anywhere but interspersed with strongly Shetland-accented announcements, it’s a station that is neither parochial nor globalised.

I was in Shetland this week for work, my first time in five years when I made a weekend of it and saw most of the county. As I drove north on Thursday night, after a delayed flight from Edinburgh and a good twenty minutes figuring out how to start my hire car, I inevitably tuned in to SIBC. The music was straight out of a bad 1990s disco, but the upbeat tempo worked well with the fresh North Sea air rushing through the open window to keep me awake and alert.

Soon, the music broke for the news – an unimaginative mix of churned press releases about local politics, the fish landing reports, and the week’s coastguard activity in numbers (seventeen last week, only one this week so far). I could only laugh out loud when the following entertainment news consisted solely of the same local voice describing a clash of personalities within pop group McBusted. 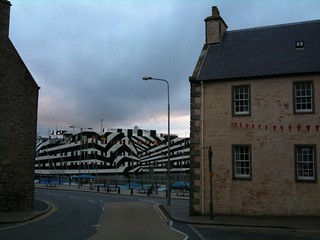 Cruise ships, I wondered, until I discovered the next day they were accommodation vessels, providing beds for the many temporary workers employed at a new gas pipeline installation. For all the talk of oil declining, it’s booming still in Shetland – or at least, the gas is.

Yet another paradox, there. While the gas booms, the oil – for which the local council negotiated a healthy cut back in the 1970s – is doing less well. This means that after decades of plenty, the council and its citizens are facing something they’ve not had to deal with for a generation: spending cuts.

After freshening up at my B&B I explored town further, the sky still light at well after half past ten. I imbibed a pint upstairs at the Lounge, one of my favourite pubs in Lerwick. Aside from a handful of obvious tourists, it was a clearly local crowd – fiddles and “Yes” badges the order of the day (so much for Shetland being a supposed hotbed of anti-independence). Music and chatter filled the room. 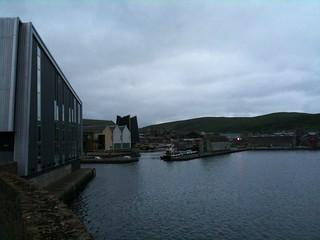 It was a sign that while questions remain about financial wealth in Shetland, cultural wealth remains widespread. Indeed, that evening I also passed the fantastic new cultural venue Mareel, an ugly shed of an arts centre that had been built since my last visit. A sign that Lerwick, a town in nobody’s shadow, continues to feel more like a capital than many bigger places.

I’d had a long day, so didn’t linger in the pub. The next day was packed with work, then a drive straight back south to the airport (SIBC on the radio, naturally). An all too fleeting visit to Shetland.

As I always say to myself, I must go back – and for longer.

The few photos I took – all iPhone and thus a little grainy – are here. For some better ones, check out the ones I took five years ago over a long weekend of magnificent sunshine.