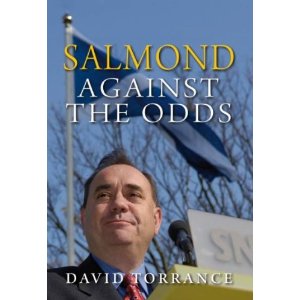 I like to say that my political retirement must be one of the earliest on record: I quit the Scottish National Party when I was twenty-one, and after being active nationally for some years in the party I am quite sure there is a “Sliding Doors“-esque parallel universe version of me who is still heavily involved and, who knows, is perhaps even a career politician.

I don’t envy my imagined alternative self for a microsecond. I’ll not bore you with the reasons why I gave up active politics (though when I left the SNP I did not stop supporting them or voting for them), but it left me in a position where I could enjoy commenting on politics without any line to tow, or indeed also enjoy being utterly apathetic if I felt like it.

One consequence of this has been that I now read considerably less political stuff than I used to, and probably wouldn’t have read the 2010 biography of SNP leader and Scottish First Minister Alex Salmond had I not received it as a present last Christmas. I had every intention to read Salmond: Against the Odds before May’s 2011 election, but various things got in the way and as such I ended up reading it after that astonishing SNP landslide which I am sure would have changed the tone of the biography had it been released now. Though of course, that’s the problem with biographies of people who are still alive and displaying few signs of changing that designation – there’s no perfect time to write them because the story is still constantly being written.

I should declare a brief connection before I continue – I know the book’s author, journalist David Torrance, from university days and recall on one occasion being interviewed by him for the student newspaper, Gaudie, while I was president of the university’s SNP society. David’s article quoted an unnamed source as describing me as a “psychopath”, which proves firstly that he was set on a path for high-powered in-depth journalism and secondly that I made the right choice when I got out of politics.

Alex Salmond, for the uninitiated, has been SNP leader for two stints, the first beginning in 1990, and became Scotland’s First Minister in 2007 when the party won a wafer-thin victory in the Scottish Parliament elections, a lead unexpectedly extended in last year’s elections to create the parliament’s first-ever overall majority. The major consequence of this is that there will almost certainly be an independence referendum, probably in 2014 or 2015, and these two major votes past and future will prove a fascinating new chapter to the book if ever David Torrance chooses to update it.

At times, Against the Odds reads like a general history of the SNP or a summary of Scottish politics through the later 20th century, rather than a pure biography, but then again this is firstly reflective of the frequent perception that Alex Salmond is the SNP or that the party is a one-man band. Because more than being First Minister, Salmond has been one of Scottish politics’ biggest figures for years, and his incredible skill, political astuteness and phenomenal debating ability that has swept aside many opponents all suggest that had he been a member of a UK party, he’d doubtless have been a major frontbench figure and, most likely, a Prime Minister if he had been a a member of the Labour or Conservative parties. And secondly, Salmond is an infamously private person, rarely discussing his private life and – unusually for a major politician – fiercely keeping his wife from the limelight.

As such, though it is surprising it has taken so long for a biography of such an important figure to appear, the book is all the more remarkable that it is able to tell us anything of Salmond at all given the subject’s tendency to privacy. It reveals stories from Salmond’s early years and family history, while quoting friends and colleagues – often anonymously – from throughout his studies and career. If I have a criticism of the book, though, it is the frequent quotations of one figure from the party’s history, Salmond’s long-standing rival and critic Jim Sillars, who – as far as I recall from my active SNP days, was little more than an irrelevance to the party at that time so must be even more so today. But it demonstrates a depth of research and a balance of perspectives that does leave as few stones unturned as possible in the portrayal of Salmond’s life.

The question at the heart of the book is what makes the man who became First Minister tick, and in a life seemingly devoid of ill intent, scandal or personal failings, the answer seems to be a genuine passion for Scotland and an enthusiasm for revealing its untapped potential. The author, to my knowledge no SNP supporter himself, has therefore produced a book that will probably reinforce the views of Salmond’s fans, reassure any neutrals, but provide no new ammunition to his enemies.

Scotland is at an important point politically, with a party and parliament dominated by one man who will (rightly or wrongly) be firmly centre stage in the forthcoming independence referendum. It’s right that we know something of that man’s history, and so Against the Odds is an important book, and engagingly written.

It’s not making me miss active party politics one bit, though.

One thought on “Against the Odds: a review of Alex Salmond’s biography”