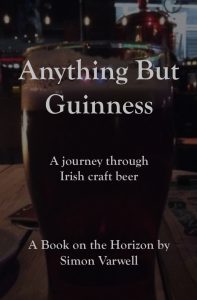 Anything But Guinness: a journey through Irish craft beer.

We all know about Guinness. But the craft beer revolution hasn’t overlooked the land of the black stuff, so I’d like to tour Ireland to explore its microbreweries and find out about its other offerings. Good thing come to those who dig a little deeper.

Guinness is arguably Ireland’s most famous export, perhaps rivalled only by U2. It’s famous across the globe, is a staple of dreadful Irish pubs in virtually every city in the world, and you’d be forgiven as a casual drinker if you struggled to name any other beers to come from that country.

Even without the recent craft beer revolution that’s quite an unfair situation, but with the proliferation of microbreweries in Ireland there’s surely a story to tell there.

The roots of this idea lie in my recent trips to Cork, a city which boasts a really impressive line in microbreweries, and it was wonderful to do – at the time of writing – three trips to Cork without needing to resort to Guinness, a drink which I don’t mind at all but don’t get too excited about. The craft beers I had in Cork were absolutely delicious, and on the basis of those trips Ireland does a fine line in creamy, flavoursome red ales.

As I sat in a pub on my final trip having a beautiful beer from the White Gypsy Brewery in Tipperary, I wondered what else the region and indeed whole country had to offer in the way of lesser-known beers.

If the brewery directory and map of Irish independent beer drinkers’ group Beoir is anything to go by, there are a huge number of breweries across Ireland, and while I am not sure I would need to visit them all to create a comprehensive picture of the state of Irish craft beer, they are satisfyingly spread across the country and present a tantalising, possibly circular, route.

As with all of these sorts of book ideas, though, it’s not all about the core concept. This journey, while mapped around beer, would also be a great excuse to explore Ireland in a bit more depth, enjoy its diverse towns and countryside, and get to know the country a lot better.

And there are a few key themes to bring to the fore here, because while anyone could imagine building a journey around a country’s beers, there are a few things that make me want to especially apply this model to Ireland. First, of course, the idea came naturally from visiting Cork and getting to like some of its craft beers.

Secondly, I’ve always had a bit of intrigue about Ireland. It’s a country that’s so close to us geographically and culturally, yet we hear so little about it on a day to day basis. Perhaps that’s media bias, perhaps it’s cultural bias, perhaps it’s because the country is known so much by its cliches and famous bits of history – everything from the famine to leprechauns to the IRA – it’s hard to dig deep into a more normal, real side of the country.

I enjoyed my time in Ireland in 2004 (as described in my first book), but there is so much more I could see. And if we’re too used in this country to looking at Ireland through the prism of its tired cliches, they come no bigger and no more worthy of putting aside than Guinness. It could be a great medium through which to take a fresh look at the country.

If all goes well, my forthcoming book on Scotland’s island breweries will give me a good grounding in writing about beer, breweries and the places in which they are found. I think there will be a balance to strike in avoiding too technical an overview of the world of beer and bringing the wider locations to the fore, without losing the foundational concept of beer on which the book rests.

If I can strike that balance in Island Hopping, and if I enjoy writing it, then this book will in a sense be a natural sequel.

A journey – and resultant book – that is both a comfortable, enjoyable experience in a country that in many ways very familiar to me and to the likely reader, but on the other hand also a gently subversive look at Ireland and Irish beer. I hope there’ll be lots of time spent exploring Irish towns, villages and pubs, which will be tremendous fun, but these are things that have been written about in great depth by many travel writers. So I hope that by intentionally looking beyond Guinness, and perhaps even chatting to some of the people behind the craft beer revolution in Ireland, I can bring a fresh perspective.

What is also enticing about this book idea is the freedom in terms of where to go. There is not a fixed route, nor a natural start or end point, so I hope that the ability to go where I want, and perhaps decide as I go, will be liberating both to write about and to read.

As I say, many writers have written about Ireland. Most have referred to pubs as they do so. A book about Irish beer and pubs has to be very good and very distinct to stand out from the crowd and not appear tired, cliched and unoriginal. I do think there’s mileage in going beyond Guinness, but there is a risk that it isn’t sufficiently eye-catching a concept to make it a good story.

This is one of my Books on the Horizon where I am hugely more confident of enjoying the journey than I am of anyone enjoying the story.

Ireland is a safe, modern English-speaking country with good infrastructure and transport links, and of course it’s not far from Scotland. So in practical terms it will be an easy book to research. With the breweries spread all across Ireland, with it being important to see more of the places I visit beyond the breweries, and with the imperative to take “rest days” from alcohol on a fairly regular basis, I don’t think this is a journey that I could justifiably rush. I’d think the itinerary therefore would demand a month to six weeks as a minimum, and that’s at least £1000 budget-wise.

Beyond that, there would need to be quite an investment in time to do a bit of planning, not least in contacting the breweries, seeing who’s interested in a visit, and coming up with a rough – but not too prescriptive – itinerary.

Not very. This is one of these ideas that I really like, but don’t have the absolute nagging, burning ambition to develop seriously as a plan like I do with some of my other Books on the Horizon. This is an original idea, I think, but applied to a very unoriginal destination. As I write above, Ireland’s been covered so well before in travel writing that I am not convinced I could make this as enjoyable a book as the journey would surely be to me.

One for the “Only if I get very rich and do all the other travel I want to do first” pile.