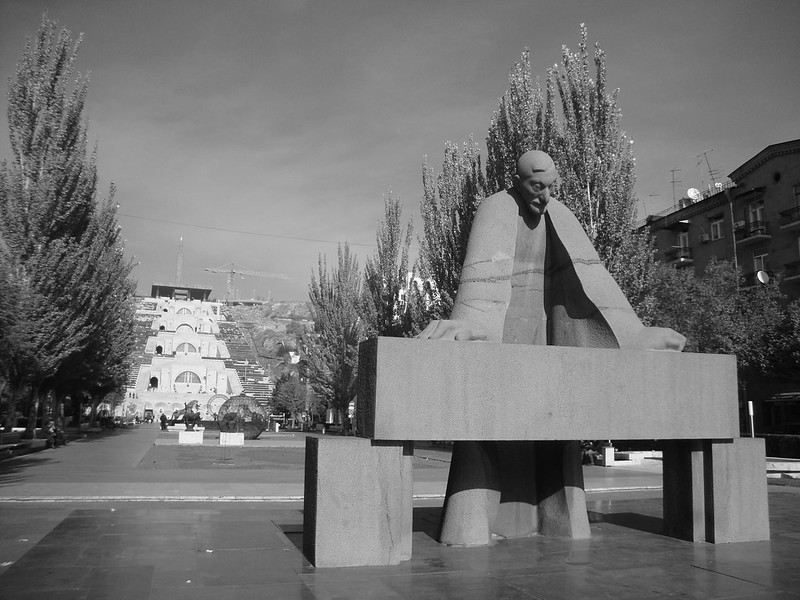 Look closely at the statue of Alexander Tamanian as he leans over a stone table at the bottom of Yerevan’s impressive Cascade, and you might detect the slightest of smiles on the otherwise austere contours of his face. And smile he might, with hopefully not a little pride.

This accomplished and profilic architect can lay more claim than perhaps anyone else to making the Armenian capital the unlikely success story that it is.

It has not been for relatively long that one has been able to call Yerevan the Armenian capital. In one sense it looks just like any typical small central European city – it is an attractive, friendly, growing and bustling hub, and a wander through its tidy and serene streets or past its bold new churches presents an image of a thoroughly pleasant and ordinary place. Indeed, the numerous churches could make you almost forget that this is in fact the south Caucasus and that Armenia has majority Muslim countries for three of its four neighbours.

Yet Yerevan is a city like no other: an accidental capital, a focal point both for the remains of what one previously called Armenia and also for a vast global diaspora many millions larger.

Moreover, it has served that purpose for less than a century – a blink of the eye for a nation whose origins lie hundreds of years before Christ. It’s a vast history, but a deeply sad one too. 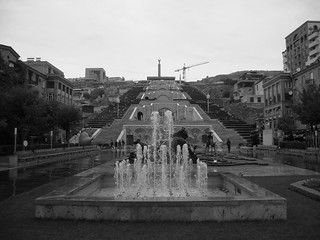 Not that you would guess that sadness just from looking past Tamanian’s statue to the Cascade. Effectively a giant staircase on a hill built over the 1970s, the Cascade is home to numerous quirky and distinctive pieces of modern art and, underneath, a museum and art gallery whose various levels are linked via escalators.

It is unquestionably one of Yerevan’s iconic sights, connecting the centre of Yerevan, known as Kentron, with the Monument district. To walk it is a journey from a part of the city that speaks of Yerevan’s modern face to a part that points to the deep scars beneath its surface. It’s therefore a good introduction to the city, and I did it once on each of my first two visits to Yerevan.

On my first climb of the steps of the Cascade, I got an increasing sense of the neo-classical beauty of Yerevan and the immense planning that Tamanian and others put into its very twentieth century skyline.

Across the road from the Cascade sits the beautiful Opera Theatre, one of Tamanian’s creations and itself fronted by statues, most notably the great Soviet Armenian composer Aram Khachaturian. 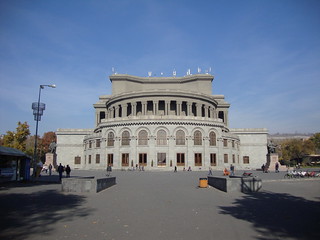 Tamanian, Khachaturian and many others exemplify Yerevan’s celebration of the nation’s leading creative figures. You cannot walk far along the streets of the capital without coming across a commemoration of a writer, philosopher, industrialist or artist. This is a city that cares about its history, because on more than one occasion it almost never survived it.

When thousands of refugees fled east from the 1915 Armenian genocide, the population of the previously unremarkable village of Yerevan swelled. It was a strange situation borne of unspeakable horror, but suddenly Yerevan had to step up to this new role.

With Armenian territory much reduced, even as the Ottoman empire crumbled, Yerevan became the seat of government of a newly independent republic in 1918. Yerevan was now both the capital of an Armenia that had never existed before, as well as the unlikely focal point for an Armenia that had existed but no longer did so. It was a capital that represented a people, yet was haunted by many of their silenced voices.

Necessary building works got underway, and the modest settlement rapidly became a capital worthy of the name, with wide streets, impressive early Soviet era civic buildings, and even a modest underground railway line.

It was a rapid transformation, thanks to the work of architects like Tamanian, and Armenia – such as it had become – joined the Soviet Union a few years after independence. It thrived economically and culturally under the USSR’s industrialisation and relative stability; at least compared to some other parts of Moscow’s sphere of influence. 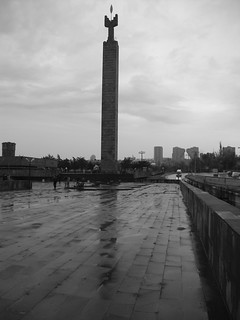 Indeed, at the top of the Cascade, past a massive building site that is testament to the Cascade area’s sense of permanent regeneration, I approached the Monument to the Fiftieth Anniversary of Soviet Armenia, an enormous pillar visible across the city and betopped by a leaf motif.

Straight out from there, on a good day, you can apparently look over the city to the snow-capped peak of Mount Ararat, a beloved, almost sacred, symbol of the Armenian people that has given its name to everything from a brandy to a local football team. Alas, since the genocide and the new republic, it sits tantalisingly and unreachably over the border in Turkey.

On my overcast autumn visits, however, the view rendered only a thick mist, and I could only imagine Ararat. Something that, with the closed border with Turkey, most Armenians can only do too.

Continuing on from the Cascade and the Monument you reach a grimy underpass. “Fuck Azerbaijan” proclaimed some graffiti, pointing to the fact that relations are even less cordial with another neighbour than with Turkey. The borders of Christian Armenia and its larger Muslim neighbour Azerbaijan were subject to the usual Soviet-era carve ups, and a predictable war in the dying days of the Soviet Union over the Nagorno-Kharabakh region ended in something of a stalemate. The border is sealed and tense, and I am told that there are occasional exchanges of fire and casualties.

The underpass leads under a busy motorway to Victory Park, where patchy and unkempt woodland gives way to what I at first thought was an abandoned amusement park, with silent dodgems, empty kiosks, and peeling paint. On closer inspection I discovered it was not abandoned: merely in exactly the state you would imagine it being on a wet, miserable morning in autumn. 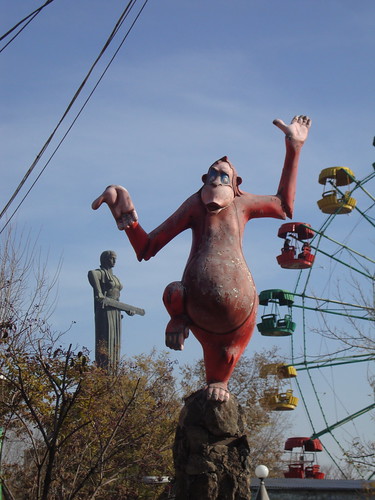 The Disney characters and closed shutters contrasted most sureally with the centrepiece of the park, Mother Armenia.

An enormous statue towering over seventy metres from the ground with an imposing position overlooking the city, the pedestal was originally the foundation for a statue of Stalin, built in 1950.

Upon his death Stalin was purged and replaced with a figure of a female warrior, sword in hand. Replica military paraphernalia is dotted around the surrounding grounds.

It seemed a contrast to the creative, genteel aura of the Cascade, or to the scholarly lineage celebrated in the city’s statues. But Mother Armenia represents an important side to the city and the nation.

Inside its pedestal lies a military museum, which I visited on my first walk through the park. It contains exhibitions devoted to Armenia’s role in the Second World War and the recent war with Azerbaijan.

The displays are detailed, with many translated into English. In the section devoted to the war with Azerbaijan, tributes are have been created to notable soldiers lost in the war – including many members of the Armenian diaspora who returned to fight. 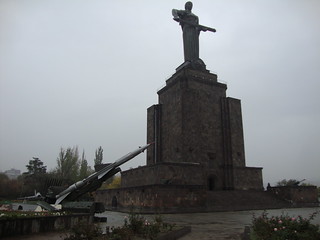 As I exited the museum, the light rain continued and the clouds, as grey as the Soviet architecture beneath, continued to shroud Yerevan.

Mother Armenia’s gaze was firmly forwards, westwards across Yerevan, to the lands where the Armenian people once lived.

Back down at the bottom of the Cascade, Alexander Tamanian faced the same direction. There was no Ararat for him to see or to reach for, though as he looked down at his work table at least there was still an Armenia at all, and a capital city it – and he – could hopefully smile about.