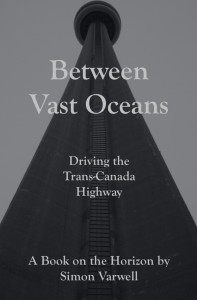 Driving the Trans-Canada Highway. And perhaps stopping a bit along the way.

Poor old Canada. Much maligned as North America’s second most noteworthy country, and regarded by many as more than a little boring, it probably doesn’t sounds like the sexiest of travel destinations.

Yet it’s always held an appeal for me. For starters, it’s big. Enormous, even. The second largest country in the world, spanning six time zones, thousands of miles from coast to coast, and a whole host of lesser-known nooks and crannies in between.

It’s also home to the Trans-Canada Highway which, when not being the title of a Boards of Canada EP, is one of the world’s longest motorways and spans pretty much the entire length of the country. I’m not the world’s biggest fan of driving, but if I had to do a road trip then I think this would be it – long, easy, quiet in places, and running through some of the most spectacular scenery in the world.

And that, really, is the core of this book – a long, chilled, frankly perhaps even lazy, road trip. There would be only vague notions of where I’d like to go, I could change my mind on a whim, and I could pick up new ideas (hey, even new company if I hunted hitchhikers) and new inspiration as I went.

Although significant research could aid this book in terms of a clear plan, unusual stories to hunt out, and off the beaten track places to discover, actually I’d be tempted to approach this book with very little preparation. All I’d need to know is where the two ends of the Trans-Canada Highway are, and off I’d go. Of all my Books on the Horizon, this one I think presents among the highest levels of total freedom. It’s an exhilarating prospect.

Although I’ve only been to a tiny corner of Canada, I’ve heard great things about the rest of it – from vast tundras to jaw-dropping mountains, cute little villages, and lively cities; and from a rich First Nation tapestry through to modern waves of immigration from the Scots to the Chinese to recent refugee arrivals. There must be some fascinating stuff lurking under that boring reputation.

The Trans-Canada Highway doesn’t take in the entirety of the country – missing out much of the north in favour of a border-hugging line through the bulk of the country’s population, but that shouldn’t stop a drive along it taking in a few (very long!) detours. The only issue would be ensuring I did the drive in good weather. The north of Canada, though doubtlessly spectacular in the winter, wouldn’t be the most fun for a road trip, but equally I’d want to avoid the intense heat of the south in midsummer.

So perhaps – to capitalise on all those iconic views of red and brown trees, this is an autumn adventure – not only between vast oceans but between vast weather extremes.

This is a trip with tremendous potential for a relatively chilled pace while still throwing up occasional surprises. It will be a laid back, hopefully interesting, journey, and that’s pretty much my favourite. I’m interested in Canada’s history, not least its connections to Scotland, and there could be more than a few relatable stories along the way.

Though admittedly I don’t think this is the tightest or most compelling concept in my Books on the Horizon series. That said, sometimes the weakest of hooks can provide the most liberating and unrestricted canvasses on which to create a story.

An epic journey, beautiful scenery, magnificent open roads, vast expanses of terrain I’ve never seen the like of before, and some interesting places and people along the way.

Very little. At worst, as someone who is ambivalent at best about driving, I’d get a bit bored behind the wheel and wouldn’t want this to rub off on the quality and richness of the writing. But I could take company or, as I say above, pick up hitchhikers. And there’ll always be something to stop and look at.

In short, a lot of time. Canada is huge. This is not a book to rush, or a journey to feel I have any kind of deadline for. And it’s not just a case of heading between the two coasts, but heading north too, into the northern territories with their vast tundra, forests and mountains.

I can’t imagine this being less than a six week journey. All that driving won’t come cheap either, so let’s assume this is a £2,000 trip at the minimum.

I’d love to think I could do this book. A drive across Canada sounds like the last thing someone would want to read about, but in a perverse way that’s what appeals to me. How can I make a famously boring country with vast expanses of nothingness sound interesting? How might the plethora of time and space create in my head the freedom to think and respond to this enormous, diverse nation?

This book is an immensely appealing prospect. Though if I had the time and money, I confess I’d choose a handful of my more tightly conceptualised Books on the Horizon over this one.