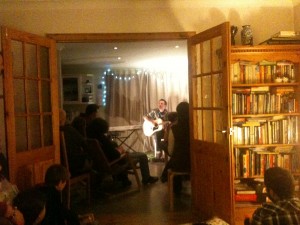 I was at a gig tonight. Well, last night, as you’re probably reading this tomorrow. I’m writing this tonight but it’s just turned into tomorrow, which will be today for you. As it is for me too, come to think about it.

Anyway, I was at a gig. Not just any gig, but a house concert. Playing was my friend Andrew Howie, otherwise known as Calamateur. I’ve mentioned him before, and reviewed a couple of his albums on this ‘ere blog, and this evening had the privilege of attending one of a series of house concerts he has been playing around the country.

It’s a novel format in one sense, stripping back music to a simple format; but as Andrew said himself a very old format too in that this was what music was like before the music industry: people playing in other people’s houses.

Calamateur’s style very much suited this format too: intimate, thoughtful, and contemplative. Only one song from the dramatic departure that was his heavier, darker, fuller last album The Quiet in the Land made it on to the setlist, and unsurprisingly it sounded very different accoustically.

I enjoyed the unusual atmosphere of the gig. No standing around with a plastic glass of lager trying to see over someone’s head, no deafening wall of sound from speakers larger than a bus, no trying to hear the band over the noise of a busy bar: just music, a reverent gathering, and an open fire gently crackling in the background.

It was a good way to hear music.