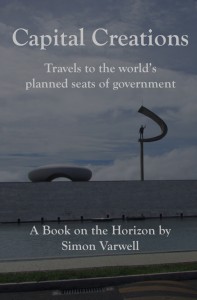 Capital Creations: Travels to the World’s Planned Seats of Government

Visiting all created capitals – those often very articial cities that governments have intentionally built from scratch to be their capital.

Canberra is boring. Brasilia is soulless. Washington DC is in the shadow of New York. Abuja and Naypyidaw are expensive failures. That’s what people say, anyway. Why would I want to visit them? Well, precisely because of those descriptions. There’s something satisfying about visiting places that everyone says are rubbish and to be avoided, because with rock bottom expectations the only way is up.

Moreover, these destinations are no ordinary collection of maligned cities. These are all capitals. More than that, they’re national capitals that were specifically created as seats of government. Whether to avoid rivalry between big cities or to rectify a perceived geographical inaccessibility, governments have decided to move their parliaments, civil service and accompanying infrastructure to a completely new location.

It’s a bizarre concept, in a way. To uproot thousands of public employees (and thousands more private or third sector hangers-on) from a possibly long-established and historic capital to a place where the paint is still yet to dry seems counter-intuitive and expensive. And while some things might be planned out of a city (like certain traffic or housing problems) the very real risk is that your new place has no heart or soul, and that new problems come up that you can never predict.

The strengths and weaknesses of “new towns” generally is a matter of considerable debate, even decades after the construction of Scotland’s six such places. Yet imagine magnifying the intensity of that debate exponentially with something as important as a created capital.

What I love about this idea is that the pros and cons of such cities are a consistent argument whether you take a world famous example like Washington DC or more recent ones in developing economies like Naypyidaw. They all are an attempt to redefine their country’s identity, shift its political centre of gravity, and make government more effective. All stand as useful case studies for both advocates and critics of the idea.

I’m not an architect, urban planner, sociologist or political theorist. So any serious academic study of the success of these created capitals is beyond me. But what does grip me is the very simple question of what they’re like to hang out in.

Where and how do people have fun? Does recreation feel like the contrived, clinical routine of a soulless, totalitarian state, or do natural, organic communities truly evolve? What’s it like when all your local mates are in the same broad sector of employment as you? Do these cities feel entirely separate from the rest of the country, visited mainly by lobbyists, diplomats and journalists and less by tourists in search of culture and history?

From Burma to Belize, there is an enticing range of places on this list – including both national and regional capitals.

Any time I say I want to visit Canberra, people tell me it’s dull and boring and not worth visiting. That merely makes me want to visit it even more.

I have an interest in lesser-known and unpopular places. I’d love, for instance, to do a tour of Scotland’s new towns – which would be even less worthy of being a “Book on the Horizon” than this one.

Beyond that, however, I have no particular expertise or claim to relevance for this mission. And while I am not aware of any book devoted to visiting all the world’s artificial capitals, there are plenty of list-based articles out there summarising some of their charms (or more often lack thereof). So I am not entirely convinced this book would be especially original, nor that I would have anything new to bring to the existing wealth of writing about them.

Finding an unexpected heart and soul in these sorts of places. And perhaps even falling in love with one or two of them.

Discovering that they’re all monumentally shit. Or starting a book where I discover my lack of knowledge of architecture, planning and suchlike cuts me off from writing authoritatively about the whole purpose of this book.

There’s no linear route here, rather a criss-cross between a set of very far apart places. Resource would depend on – or be dictated by – how many places I visit. Do I include regional sub-state capitals, for instance, or just the national ones? And should I limit myself to just a dozen or so cities, or cram in loads?

Either way, this could be an expensive trip. I’d expect that doing it justice could require as much as a year and twenty thousand pounds.

No chance. Much as I consistently love this concept, my qualifications for the task are about as scant as the time and money I have available to undertake it.