A couple of years ago I was on a bus in Edinburgh, on my way back to the city centre from (I think) a conference somewhere on the outskirts.

As every single conversation in Edinburgh has done for the last few years, my chat with the person next to me turned to trams, with a resigned discussion about the delays caused by the considerable upheaval that the city’s tram project brought about. 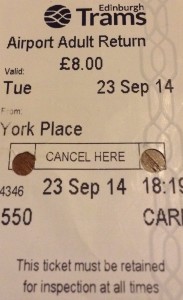 Well, to be accurate it wasn’t the project itself that caused the upheaval: the problem was its gross mismanagement, which brought huge traffic delays, and more closed streets, roadworks, noise, stress, uncertainty and detrimental impacts on businesses and tourism than had been intended. As such, the trams were delivered shockingly late, outrageously over budget, and with a much shorter line than originally proposed.

Ever the optimist, I said to my fellow conversant that it would all be fine once the trams were up and running.

“I seriously hope you’re joking!” a stranger in the seat in front of me, a middle-aged woman with a posh Edinburgh accent, snapped at me, swinging around to involve herself in a conversation that was none of her business.

“Of course I was,” I smiled politely. Reassured, she turned back and returned to minding her own business.

I didn’t have the guts to tell her that actually I wasn’t joking in the slightest. I genuinely believed that it really would be fine. While the wastage and delay had been criminal, I really thought that Edinburghers would soon come to love the trams, that the line would prove itself a success, and the case for expansion of the line would quickly become irrefutable.

The jury is still out on those questions, I think, but certainly the line from the city centre to Edinburgh airport has been running without much of a hitch for some months now. And that’s great news, not least for a rail aficionado like me who is thoroughly persuaded of the merits of trams. It’s a shame that in the middle of the twentieth century the trams disappeared from Scotland’s cities to be replaced, all too often, with ugly motorways charging through land that had been cleared of its Victorian architectural gems and of real, living communities.

As soon as the line was open I knew I’d want to have a go on it, and travel the line from the city centre out to the airport and back for no other reason than the fact that I could. And, a few weeks ago, I was able to do just that when down in the capital overnight for work. 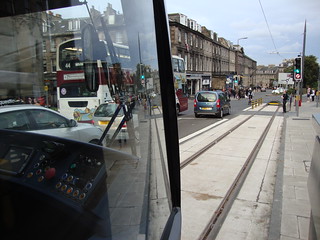 The one line that was constructed runs from York Place in the New Town along Princes Street and through the West End, and terminates at the airport.

The plan for the line to run in the other direction from York Place right down Leith Walk was dropped as part of the revised plan, but when I arrived at the York Place terminal the line was clearly set for some future potential expansion (right).

I bought my ticket from a ticket machine at the stop. It was easy to use, though if it hadn’t been there was a very pleasant and chatty conductor close by.

The tram itself was comfortable, though perhaps no more so than the buses, and there was plenty luggage space. What surprised me, however, was although we were generally faster than the cars and buses with whom we shared the road, the speed was a gentle one. 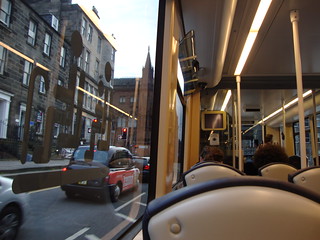 Things speeded up somewhat however when we got out of the city and into the strange deadzone between the suburban housing estates and retail parks, and the airport itself.

And what was particularly pleasant throughout was the smoothness and quietness of the journey. None of the bumpiness of the bus or the noise of the train – it was a gentle, almost soporific glide.

The journey was thirty-five minutes, and at this time of the evening there weren’t too many passengers, and many of the stops outside the city centre saw very few folk getting on or off. Maybe it was because it was well after rush hour, people hadn’t got used to the trams yet, or of course it might have been the limited, linear route. 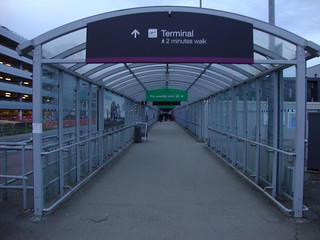 When we arrived at the airport, I was slightly disappointed that the stop was well outside the terminal, with an advertised two minute walk along a mostly covered walkway along the side of the terminal building.

Even at my fast pace I’m not convinced it was as short as that, and I was also surprised things were exposed to the elements.

When you arrive at an airport by train, it may be a long walk to where you want to go but you’re still at least within the terminal, which is psychologically important in terms of knowing you don’t need to haul your baggage between a station and another building. Edinburgh airport terminal seemed to be undergoing a major refurbishment, so this situation might change, but for now is a bit of a weakness.

Airports are interesting places to wander round and people watch in normally, though Edinburgh airport in the mid-evening was a quiet place. After a lonely pint in a suitably soulless Wetherspoons pub it was time to head back, a return journey to the city centre on a nearly empty tram through the dark and rain.

At eight pounds return it was a steep cost for a pointless treat. And more importantly it’s also more than the still-running airport bus.

But if the network expands over the years to take in other areas of the city, as was always intended, it could become a very nifty way of getting around.

You can find all the photos I uploaded that evening here.