One regret I had over my two spells in Armenia was not exploring more of the wider countryside outside Yerevan. The lack of such expeditions was partly due to a busy work schedule, and partly because Yerevan was such a fascinating city with so much to see and do that it was quite easy to spend the bulk of my free time there.

And despite being such a tiny country where Yerevan dominates in terms of population, economy and politics, there is plenty to see elsewhere in Armenia. You don’t fully appreciate it when in the centre of Yerevan but the countryside outside the city is rugged, mountainous, dramatic and very beautiful indeed.

I had only two trips out of Yerevan, and neither were to anywhere desperately far away. Admittedly nowhere in Armenia is desperately far from Yerevan, and due to the tense situation with Azerbaijan many parts of the country near the border are not so easy to visit. But there is plenty within an hour or two of Yerevan to provide numerous interesting day trips. And, frankly, if I ever return to Armenia I’d love to spend some time overnight elsewhere in the country. 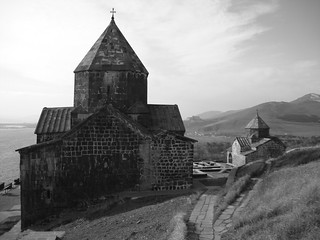 The first adventure was to Armenia’s largest lake, Sevan. The area is quite a magnet for tourists, as it is the country’s only truly substantial body of water and is home to a few sites of religious and historical importance.

A short drive from the rather dusty and unimpressive town of Sevan is a peninsula which is home to the historic Sevanavank monastery complex, founded in the ninth century.

The mountains and lake provide a beautiful backdrop to the two churches on the peninsula, and this being one of the top sights in the country it was the first time I witnessed some enthusiastic hawking from stallholders from what otherwise seemed to be a rather reserved nation of people. 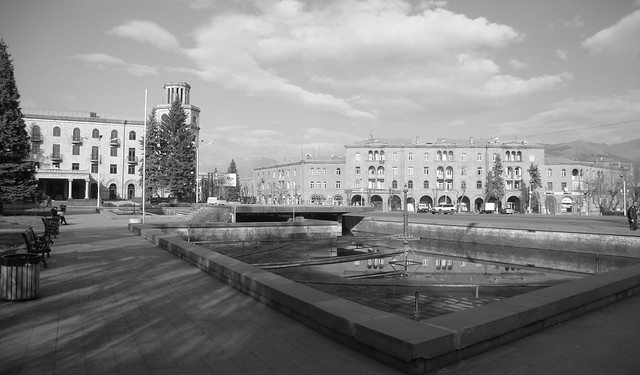 The second trip I took was to Armenia’s third city, Vanadzor. While its centre was attractive and neat, and a pleasant environment to stroll around, Vanadzor is not among Armenia’s top destinations.

The real draw was the journey, a two hour ride in a cramped shared minibus through some breathtaking scenery.

In many ways the grey, dusty mountains reminded me a lot of Albania. Indeed, Albania kept coming to my mind throughout my trip as it shares much with Armenia. Of course, the two countries are very different in many respects. But both are countries with significant Communist and Ottoman legacies. Both are small lands with long but challenging histories, vast disporas and mostly less than amiable neighbouring countries. Both have unique languages. 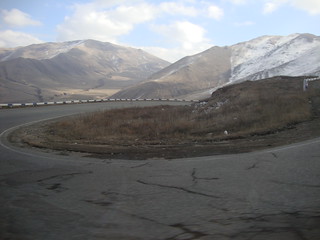 And as we wound our way through twisty mountain highways and past crumbling graveyards of post-industrial decay – and through what appeared to be Armenia’s answer to the Bealach na Bà (see photo) – my mind was cast back to my three visits to Albania. The first of those was about a decade after the fall of Communism (and I tell a bit about that in my first book).

With the Soviet approach to rural industrialisation being somewhat less than aesthetically motivated, the juxtaposition of small towns, dramatic mountains and rusting, belching industrial wastelands is one shared by the two countries.

The countryside in both was similar, and while Yerevan felt a smarter, more refined city than Albania’s capital Tirana did when I last went, I can’t help wondering and hoping if Tirana, for all its charms, might have improved somewhat in the decade or more since I’ve been.

I hope I get to go back to Albania one day soon to find out. And of course I hope to go back and explore much more of the rest of Armenia too.