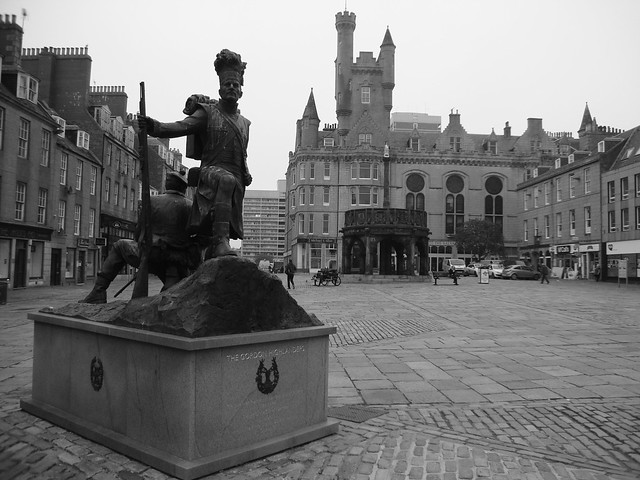 For all that Aberdeen is widely and unfairly maligned for being grey, there’s an element of truth to the comment. I do love the city – probably more than any other Scottish city except Inverness – but the endless grey granite across the city centre can get a bit monotonous even for a fan like me.

But look around – and look up – and there is a considerable beauty to it. The medieval heart, Old Aberdeen, is perhaps the best example of its era in the country. The harbourside is a spectacular mix of the old and the new. And the city centre and west end are packed with ornate and resplendent architecture, not least in the form of the city’s fine civic buildings, often the hallmark of famous architect Archibald Simpson.

So when, some years ago, Lonely Planet famously described the city in a new Scotland guide as “an extraordinary symphony in grey“, I like to think it was a compliment. Albeit a slightly backhanded one. 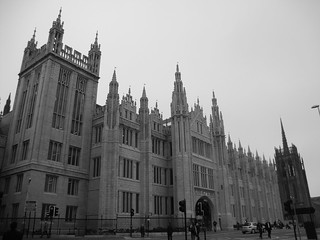 And when the thick haar rolls in from the North Sea on whose coast the city sits, it merely adds to Aberdeen’s eerie beauty.

It was this condition in which I found the city when I headed through for work a few weeks ago. I didn’t have much free time but managed to grab a few photos around the city centre.

And ever the optimist and Aberdeen loyalist, I managed to find this shrouded condition a compelling one. There’s a haunting aura to the city – if your eyes can penetrate the dense air – rendering it something of a ghost town.

It’s a perfect canvas for gothic fiction, and I’m surprised that, Stuart McBride‘s detective novels aside, not more well-known horror or film noir has emanated from Aberdeen. If Batman had been Scottish, you could imagine him surveying the uncompromisingly dark skyline from atop the gothic masterpiece that is Marischal College (above right and below). 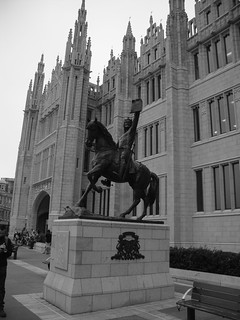 Not that Marischal – probably my favourite building anywhere in the world – is as dark as it once was. Thanks to a clean up as part of its new role as city council HQ, it’s a fresher, brighter building that brings a glint and sparkle to the surrounding area.

It’s a much improved building. Not least now the ugly skyscraper that was the council’s former home across the road is no more and a splendid statue of Robert the Bruce (left) – perfectly in keeping with its surroundings – has been erected outside.

Batman might feel slightly less at home, for sure, but due to a lack of coordination on cleaning with the neighbouring Greyfriars church (on the far right of the above photo), there’s still a bit of brooding, dark gothic for him to cling to.

Not least when the fog rolls in.