I’m in the process of writing my Inverness to Edinburgh rail journey The Next Stop. I’ve been getting on quite well with it in recent weeks, thanks for asking.

I’m at stage two out of four in the write-up, and this morning I’ve been working on the part when I travel from Dalwhinnie to Blair Atholl on the morning of the trip’s third day.

But when I wrote the corresponding part at stage one – which involved merely typing up the notes I took – I spent a considerable amount of time simply staring at my notebook in confusion. Because in between my notes on Dalwhinnie and Blair Atholl were the the simple words: 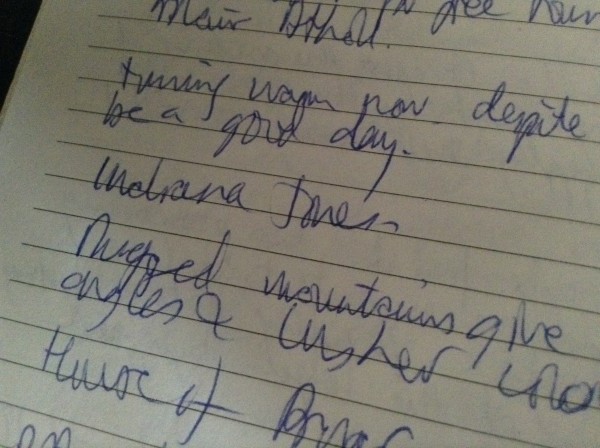 Now the whole idea of taking notes when travelling is to make it easier to remember what happened. When you don’t have time to write extensive notes, you obviously resort to clues or prompts – short words or phrases that later trigger the story, image or detail that you were registering at the time.

It’s obviously not a failsafe process, because I simply could not remember why on earth I’d written “Indiana Jones”, and it seems that at the time of writing it I had more faith in my powers of word association than was deserved. To my knowledge, there is no particular connection between the action hero and either Dalwhinnie or Blair Atholl.

So why had I written it? Was there someone on the train who bore an uncanny resemblance to Harrison Ford? Was I failing to recall a conversation with a fellow passenger about the film series? Or had I completely forgotten about that moment when someone ran, terrified, down the aisle of the train, followed by a lumbering ball of rock?

I was pretty sure it wasn’t any of those possibilities, so I just typed the name up along with the rest of the notes and left it as a problem for the next round of editing.

And that brings me to this morning’s efforts, as I battled anew with the meaning of this cryptic message. It’s perhaps the sort of strange code that one would need the famous archaeologist himself to decipher.

Until I became, I would strongly wager, the only person in the world ever to have googled the words “Indiana Jones Dalwhinnie”. And, to my relief, I found my answer on two webpages about hillwalking here and here: a bridge crossing a river that was described on both pages as like something out of an Indiana Jones film.

The pictures on each page show the rickety nature of the flimsy-looking swing bridge, and you can imagine an intrepid adventurer being just one misplaced step away from being breakfast for crocodiles. Except for the fact that the bridge is barely a metre or so above the river, and there are no crocodiles (to my knowledge) in that part of the world.

And having seen it online, I now remember it quite clearly.

Not far south of Dalwhinnie the train passes between mountains as it heads south, the A9 on the left and a river on the right. At this high altitude, and in winter months at least, the river is often frozen and the ground covered in snow. In the early morning the bright, low sunshine from the south glints on the river, and it’s a beautiful, dramatic scene. And I have noticed the bridge countless times because it stands out on the hillside as a lone human structure and really does look like the sort of bridge that could easily fall apart in bad weather.

This shows that great minds think alike – that three different people can see a bridge and all be reminded of Indiana Jones. But it also shows just how good human memory can be. It demonstrates that, having travelled that line more times that I can remember, images from the route are buried deep in my mind – so deeply, in this case, it requires a brief bit of detective work to tease them to the fore.

To be honest, I have done this journey so often that I could probably give a reasonable description of the scenery from Inverness to Edinburgh purely from memory.

Thankfully though, I won’t need to rely on my memory too much when writing The Next Stop. My notes aren’t that consistently bad.