Inverie must be one of the UK’s most compelling villages.

I’ll get the obvious and the cliched out of the way immediately: Inverie is regularly touted as one of Britain’s remotest villages. That’s an accurate claim but an unhelpful one, because the baggage that comes with the term “remote” implies that the place is disconnected, poorly served and a hassle to get to.

One might argue each of those things are true, but Inverie is no locus of deprivation, isolation or neglect, nor is it a place of cultural or economic backwardness. Or at least, it might be and would be once again, were it not for the tremendous efforts of its inhabitants and the notable events of its recent history. 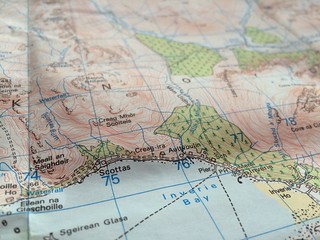 In fact, Inverie is a living, breathing example of the power of land reform movements and community ownership.

This tiny village on the shores of Loch Nevis in Lochaber, up to an hour by boat from Mallaig and 14 miles’ walk through the hills to the rest of the British road network, is a thriving, bustling place full of life, colour, and an optimism and energy that is so hard to find in much of the Highlands of Scotland these days.

But it could so easily have been otherwise, and indeed it was until quite recently. Prior to the Highland Clearances, which had an especially devastating effect on the area, the population of Knoydart was around 1,000 before it tumbled down and people left – willingly or otherwise – in their droves. Over the decades, various awful and controversial absentee landowners exacerbated problems, and land appropriation efforts such as those of the Seven Men of Knoydart in 1948 could not reverse the downward spiral.

In the late twentieth century, it was looking like the sustainability of the community was in danger. Big questions needed to be asked. And at that crossroads, people chose a very exciting option. Enter stage left the Knoydart Foundation. Set up in 1997, and taking advantage of Scottish devolution’s new impetus for community buyouts, the foundation now owns the 17,000 acre Knoydart Estate. 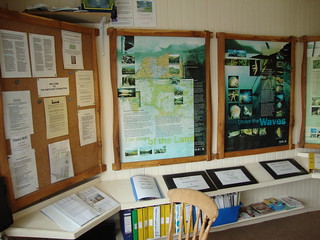 The estate has a population of only 100, half of whom are in Inverie. But Inverie feels like it has a heck of a lot more inhabitants than that. And that’s not just down to the regular boatloads of tourists who make their way over from Mallaig either.

For a village of a few dozen people, there is a surprising breadth of facilities: a shop, a post office, the foundation office (which doubles up as a modest museum telling the story of the area), a cafe, a snack van, a pottery, the bustling pier, a primary school, several accommodation options, and the legendary Old Forge Inn.

There were various construction and reconstruction projects in evidence when I was there. Everyone in the village seems busy. As is common in rural Scotland, people have multiple jobs. The foundation itself is a major employer. 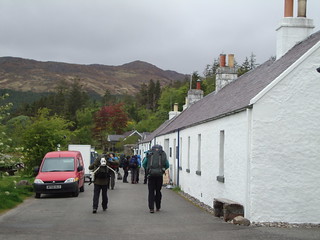 On one level it seems hard to imagine the village is so thriving, but sitting amongst the wild lands of Knoydart, Inverie has a hinterland brimming with economic potential. The land and the water surrounding Inverie may be isolating factors, but they are also its driving forces.

The area is renowned for its hillwalking and other outdoor pursuits. Whether for a day or, like us, longer, people will come from all over to bag Munros, cycle, canoe and do lots more. The lush countryside is a source of wood and venison (the latter available to buy in seemingly endless quantities from the village shop, and, I can testify, absolutely beautiful).

The hydro electric capacity, of course owned by the foundation, provides electricity. Someone involved in the foundation told me that it runs at a surplus. So much so, in fact, that they were researching what industries they could develop that could put that surplus to good use. It’s a sobering reminder of how stupid we are to be so reliant on fossil fuels, when this tiny little corner of Scotland is producing so much green energy it literally doesn’t know what to do with it all.

Throughout our week on Knoydart, I referred to the main street of Inverie as “the city centre”. I was joking, but only partly. With such a range of facilities all within a short walk of each other, Inverie had a whole lot more sense of place and buzz than many larger villages I’ve visited.

Yes there is a whole culture and population that has been ripped from the land over the years. And yes Inverie has had a bloody tough history. But despite all that, it continues and thrives. It’s no doubt very hard work for those involved, certain facilities will be a ferry journey away, and there may still be threats to the area’s sustainability. But it’s a living, working testament to what a small community can do.

For that reason, some months later, I can’t quite get the place out of my head.