I had no idea I was so close to the border. Frankly, I didn’t even know there was a border until I saw a sign, and my curiosity led me through a gate and down a hill along a rough path.

My route was slippery in places, and overgrown. There was no sign of life, however, except for distant houses across the bay, bold against the brown textures of the hillsides and the grey of the sky. Coming to what I now knew to be the edge of Scotland, I approached the bridge: a low wooden structure that snaked across the no man’s land of rock, moss and the last vestiges of low tide. When the sea rushed in to the bay, it would surely be a tricky crossing: not one to attempt after a drink or two.

Nobody was around, and nobody could see me. At least, that I could discern. Signs told me there was no unauthorised entry, but the daredevil in me wanted to be an illegal immigrant, at least for a short while. And anyway, what harm could come from entering an isolated country without permission? 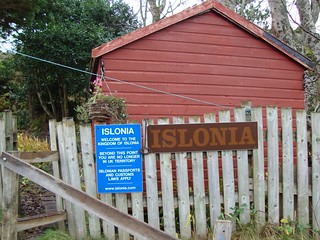 Gingerly traversing the bridge I reached the other side, the island thick with trees and the sky heavy with cloud.

Against a fence there was a modest sign “Islonia”. I was warned that “beyond this point you are no longer in UK territory. Islonian passports and customs laws apply”.

With only my driver’s licence in my wallet for identification, and with no knowledge of whether anything I was carrying was prohibited, I threw caution to the wind and stepped forward, into a foreign country.

I’ve always been drawn to the concept of the micronation – small, self-declared and usually entirely ignored entities that often consist of little more than the founder and a few hangers-on, but which aspire to statehood regardless of the legalities, practicalities or effort required.

Often these places are sparked by hot-headed stupidity, laughable idealism, or a stubborn dislike of authority, other people, or both. But equally, there’s something charming about the idea that, in a world of mega-corporations, globalisation and superpower military aggression, a small bunch of people can opt out, think locally, assert their identity, and try to do things differently.

Perhaps the best known and most serious example of a micronation is Sealand, a country established on an abandoned World War 2 military installation in the North Sea. Founded in 1967 by what one might charitably describe as an eccentric but pioneering individual, it actually seems that there is a modicum of legal strength behind Sealand’s declaration of statehood, appearing to lie, as it is claimed to, within international waters. It’s history has been short but colourful, with hostage situations and devastating fires featuring in its struggle to assert its independence.

I’ve no idea if Islonia’s history has been quite so (excuse the pun) rocky, nor if there is any serious intent behind the self-declared independence, but the tiny island in a bay next to the village of Badachro in Wester Ross certainly seems from its website to have asserted its presence on the global stage.

Whether that assertion has ever been noticed or challenged is unclear, though on the peaceful day I visited I couldn’t imagine it ever sparking a constitutional or legal crisis. And certainly I couldn’t imagine an amphibious invasion force being launched against it by the UK armed forces. They’d never get a tank on to the fragile, narrow bridge for starters.

As it was, my uninvited presence might well have been the biggest threat to its constitutional integrity since its foundation just a couple of years previously. Indeed, given I didn’t see a soul during my peaceful ten-minute invasion, it is probably an act of great charity and restraint on my part that I chose not to annexe Islonia and declare myself the new ruler.

Either that, or it was a move of military and economic levelheadedness on my part as I hadn’t so much as brought a sandwich with me. 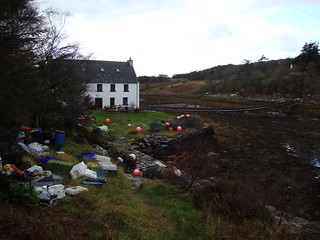 The island was devoid of people on my short explore, but not devoid of life. There were a couple of houses – holiday rentals, it seems – a few sheds here and there, and a scattering of creels and other fishing paraphernalia dotted around the shoreline.

Scotland, a foreign country, surrounded me across the water on all sides.

It was exciting and reassuring to think that, out here on the edge of the north Atlantic, the English border often feeling a world away, I could find myself in an entirely foreign country without even leaving the Highlands.

I’ll remember my passport next time, though.