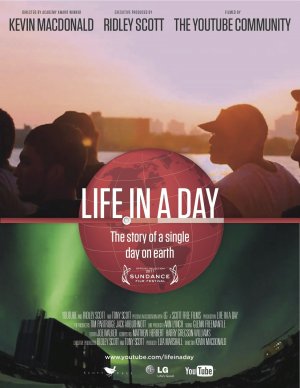 I went to the cinema at Eden Court last night with some friends to see Life in a Day, an unusual and surprisingly effective film experiment.  The premise, created by YouTube, Ridley Scott and others, involved asking people all over the world to submit videos of their lives taken on one particular day – 24 July 2010.

Prompted only by a few questions, such as “what is in your pockets?”, “what do you fear?”, and “what do you love?”, thousands of hours of footage were submitted and various extracts were put together.  The result is an astonishingly moving and inspiring portrait of humanity, from its dramas to its equally beautiful mundanities.

The film leads us intimately into the lives of a diverse and seemingly disparate collection of people throughout the world.  A young Japanese man living with his toddler son in a cramped and untidy apartment, poignantly lighting an incense candle each morning to his seemingly dead wife.  A young South American boy who works as a shoe shiner.  A group of goat farmers somewhere in Europe.  A destitute man and his family living by a graveyard in an Arab country.  A gay American man documenting his “coming out” over the phone to his grandmother.  A Korean man nine years into his round the world cycle trip.

We often discover little about the people we see. Subtitles (where needed) tell us their words, but not their names, countries or occupations.  Such things are left for us to ponder but then quickly dismiss as we realise that it is the everyday details of their lives, rather than the headline biographies, that matter more and which more meaningfully illustrate their humanity.

The film’s “stars” and “co-directors” are seemingly unconnected individuals, yet connected that day either by their desires to film themselves or by others’ desires to film them.  The project brings them together as strangers in a collective sharing of their moments and experiences that day.  As the film progresses, whether Asian families struggling to make ends meet or Americans battling with classic “middle class” problems, the commonality of people becomes more apparent: we discover that love of simple things like family, friends and food is universal; that love of God or fear of death is widespread, that everyone wants to be happy, that most people are essentially good.

Despite the plethora of languages, accents, standards of living and locations, the film presents the clear impression that we are pretty much the same, and life goes on in often ordinary ways for people all over the world.  We see laughter, tears, dancing, mourning and celebration. We see a few births and deaths, we see meals eaten alone or together, religious ceremonies being performed, and possessions or loved ones being cherished.  There is joy and sadness, but also great humour – both intentional and otherwise.

But there is another side to the film that in a sense grabbed me more strongly – the scenes of different countries and cultures around the world.  Whether it is the family on a simple boat on a river overshadowed by the massive luxury liner in the background, a dramatic night-time thunderstorm in an industrial coastal city, or an Afghan man taking us on a tour of the bustling, colourful markets of Kabul, it is the places that join the people in becoming the film’s characters.  The places, as much as the people, are a key part of the story.  While we might easily talk about the portrayal of humanity’s diversity, beauty and commonality in this film, the same is also, perhaps inadvertently, true about our planet.

It’s a film that can affirm your faith in humanity, yes, but more than that it can fuel your desire to get out and explore this incredible world of ours.