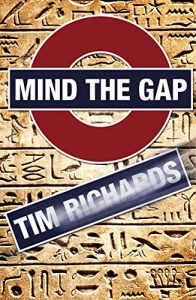 Twitter never fails to be an continual source of interesting people, and one of my great joys on that platform is the ability to follow the lives and works of a host of great travel writers and journalists. It’s a great insight into how the world of travel works, a chance to travel vicariously, and a constant reminder of how glad I am not to depend on this unrelenting and precarious source of income for my main job.

One such contact I’ve made – and enjoy chatting to regularly – is the Melbourne-based travel journalist Tim Richards (to whom top marks for having an Esperanto name for his travel blog).

He recently broke into fiction with an action-packed round-the-world novel called Mind The Gap, which I finished recently. I should offer as a brief disclaimer the slight nervousness that Tim will probably read this review, but he (and I) needn’t worry as I’m glad to say I really enjoyed the book.

Mind The Gap is a fantasy novel set in the present day and – at least in part – the Earth of our dimension. The main character, a Londoner of Egyptian stock called Darius, suddenly finds himself teleported away from the London Underground and pursued by strange creatures from an alternative reality. That reality is a parallel Earth, where two forces – aligned around different aspects of ancient Egypt – are battling for supremacy of both our world and their own, and Darius is caught up in the middle and the perceived fulfilment of an old prophecy.

Discovering he has a strange ability to teleport between different city subway systems, Darius has to save the world(s), save the inevitable girl he bumps into along the way, and find his way home.

It’s a fun and fast-paced story, drawing heavily on various ancient mythologies and great details of major world cities (those of both worlds). The author’s knowledge of these topics and places, not least his considerable travel experience, shine through and brings many of the locations to life, although in the frequent jumps between scenes, worlds and various characters’ points of view, it’s sometimes hard to keep up with what is going on.

Indeed if I had a criticism of the book, it would be that it is a tad long, with often rich mythological background sometimes going over my head and the book. It also occasionally feels like there are rather too many dream sequences from different characters, the relevance of which often only manifest themselves later or just me by – and they from time to time don’t sit well with the otherwise whirlwind, surreal, page-turner feel to the book.

While Mind The Gap is tremendously good fun, and is of course based on a delightfully silly fantasy premise, I found myself wondering once or twice whether I wasn’t taking the story quite as a seriously as the author was. I thought in turn that a slightly abridged version that allowed itself to relax a little would make a superb, wanderlust-making novel for a young adult audience.

That said, there’s plenty to keep the interest – Darius is a warm and likeable main character, many of the others we meet from both Earths are engaging and richly presented, and there’s always a new twist, a new change of location or a new dimension (literal and figurative) thrown in to keep you wondering what’s going to happen next.

Moving from city to city and reality to reality, Mind The Gap is an enjoyable mix of action, mythology and travel, and a curious but successful blend of real world adventure and fictional world fantasy. It is a fun, full-on and fasten-your-seatbelt read.