As featured on television in New Zealand…

There are twenty-eight places in the world that contain the word “mullet” in their name. Most are insignificant villages or creeks in far corners of the English-speaking world. One is in a land blighted by war and natural disaster. One is 190 feet below sea level. Another doesn’t even exist. From Albania to Australia to Haiti, mullets are found not just on heads but on maps.

Over the years, I’ve been attempting to visit them. Or at least, the twenty-eight on my list. To see where they all are, check out my mullet mission map.

The roots of the mission

Mullets are haircuts which are short at the front and sides but long at the back, and hark back to a by-gone age of permed footballers and curly 1980s rock stars. They are met with revulsion from the fashion police on the one hand, and with an excited admiration mullet-spotters on the other.

I fall awkwardly between the two camps – feeling both abhorrence and also a compulsion to watch, like a hideous car crash.

My fascination (some would say obsession) with mullets began while travelling with university friend Niall round eastern Europe and the Middle East in 2001.  Niall was a keen mullet-spotter, and began constructing a Mullet League Table of all the towns and villages we visited. I joined in, and was quickly sucked into the dark and compelling world of mulletology. 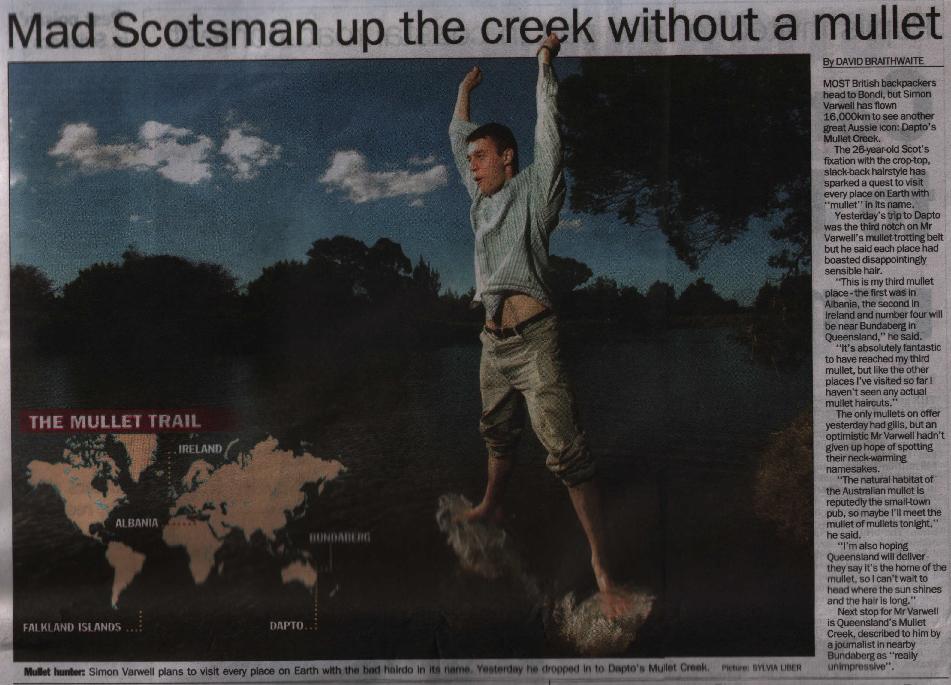 A couple of years later, surfing the web while bored at work one day, I discovered that there was a village near Tirana in Albania with the wonderful and simple name of Mullet. This set my mind wandering, and within an afternoon I had discovered more places with “mullet” in their name.

What would these places be like? Would they have anything in common, other than a hair-related name? Would they be dark and sordid hotbeds of mulletry themselves? And should I not stop faffing about on the internet and get some work done?

I bagged my first “mullet” in Albania (or so I thought at the time), and since then have been to Ireland, Australia, England, Canada, New Zealand and the USA on the hunt for more.

The mission has been covered by press, TV and radio throughout the world, such as in Australia’s Sydney Morning Herald, Scotland’s Daily Record, and TVNZ’s Close Up show (see the video at the top of the page).

Other articles and radio pieces online include Australia’s Illawarra Mercury and Bundaberg News-Mail; the London edition of the Metro; and New Zealand’s RadioLIVE (listen), Sunday Star Times and NZ Herald, among many, many more.

Do you life in one of the places that I am yet to visit? Maybe you could tell me something about the place before I go there, by emailing me on iliveinamullet@simonvarwell.co.uk.

Keep up with the latest!

The last mullets I visited were in New Zealand in January 2008, and in September 2008 I attempted to visit Mullet Island in California and explore an honorary mullet, “Mulletville”, in Washington state.

Not long after that, I made the decision that the mission will involve visiting the 28 on the list, and no more.  You can read the mullet-related posts here on my website to get the very latest updates. There are also photos in my Flickr mullet-hunting set, and a full interactive guide on my mullet mission map (above, or in Google Maps).

In February 2010, Sandstone Press published my first book, Up The Creek Without A Mullet, telling the story of the origins of the mission and the first three adventures. The sequel, The Return of the Mullet Hunter, was published in December 2013 – it charts my trips to England, Canada, New Zealand and the USA, bringing the story up to the present day.