One of the most stunning spots on the train line south of Inverness is the Pass of Killiecrankie, lying in between Blair Atholl and Pitlochy stations in Perthshire.

It’s also a frustrating spot, however. The pass is a deep gorge along which the train runs, but in between tunnels and trees there’s only the briefest glimpses of the spectacular view. That means most of my attempts to photograph the pass – assuming I’m sitting on the correct side of the train – usually end up as a blurry effort like this. 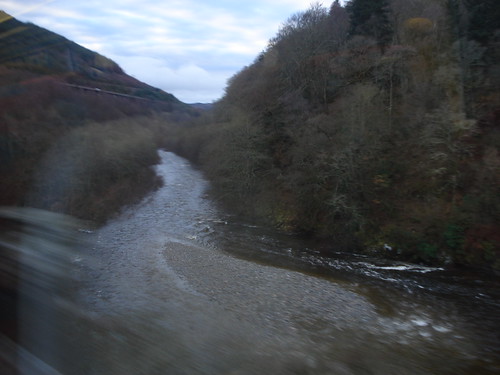 It’s always been my ambition to get to the bottom of the gorge and see the view from another (not to mention a longer) viewpoint, and even my adventures for The Next Stop didn’t give me a chance to take a closer look, far as this is on foot from either adjacent station.

During a few days’ holiday in Perthshire last month, however, I managed to finally pay more than a fleeting visit to the pass. And what a spot it is. 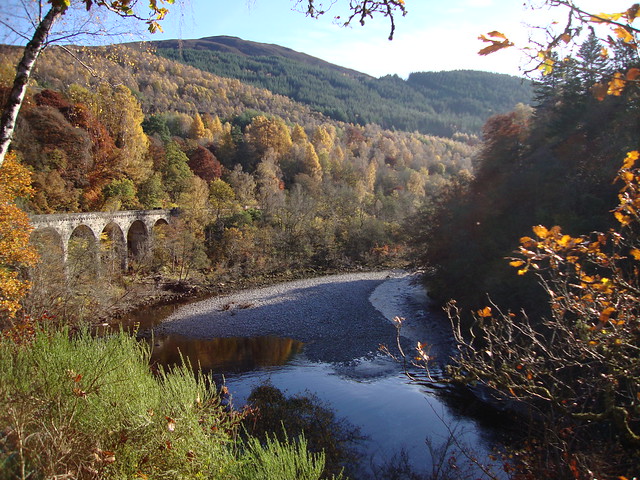 You can reach the pass through a visitor’s centre just off the A9, where you can find out a bit more about the natural and human history of the area – including the 1689 Battle of Killiecrankie, part of the first of a number of Jacobite Rebellions – and follow a few short walks.

Visiting in November as I did, I got to see the location at its most respendently autumnal, with deep, rich reds, browns and yellows setting the entire area alight. The still water in the river below, the clear blue sky, and the 510 foot long viaduct, constructed in 1863, all made for perfect photograph opportunities. It was a beautiful place to just stop and look.

I was a little disappointed not to see a train whooshing past along the viaduct, and to imagine myself looking out of the window for the briefest of views as I travelled. Typically enough, however, I heard the sound of one go past not long after leaving the best viewpoint.

Having recently visited Newtonmore for an afternoon, I’m glad to be finally ticking off more curiosities that weren’t sufficiently (or at all) scratched on my The Next Stop trip.

See a handful of my other photos from the pass here on Flickr. It’s not far off the A9, as I say, so it’s well worth stopping to see the pass if you happen to, well, pass.