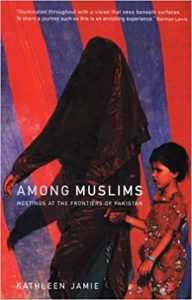 May’s book has been the one I’ve thought about the least in advance, and in some sense have been least looking forward to.

I don’t mean that in a negative way. It’s just it’s been a book – and author – I’ve known little or nothing about. With previous books there’s been a hook or a motivation for reading it. Dervla Murphy, for instance, I was approaching knowing she was a legend of the genre; last month’s Jenny Diski came with my recalling seeing multiple tributes at the time of her death.

But for Kathleen Jamie’s Among Muslims, there’s been little fanfare or hype for me. Indeed, it’s one of the few titles to join my reading list without a direct recommendation from someone or a review elsewhere.

But when I looked up Kathleen Jamie (see her website and Amazon page), my eye was drawn not, as per Mike’s recommendations, to her exploration of Scotland but to her adventures in Pakistan.

This was for a couple of reasons. The author (and, it should be noted, poet and essayist) was Scottish. While I was keen to read Scottish authors as part of the mission, I didn’t want to overload my list with too many books set in Scotland. After all, I’d be finishing on a local note (I’m very much looking forward to Nan Shepherd’s The Living Mountain in December, and will obviously say more more in due course).

And secondly, I wanted to see female travel writers go to unusual and potentially challenging places, to truly prove the point that they can do anything that their male counterparts can do. Among Muslims: Meetings at the Frontiers of Pakistan sounds like a thrilling book; a journey that sounds less than easy, enriched by, according to the blurb, the author’s own reflections on her life back in Scotland.

The book comes with two tiny notes of caution in my head. Firstly, I’ve already “done” Pakistan a little with Dervla Murphy in February. Though admittedly she cycled through it, whereas Kathleen Jamie seems to have lingered longer. And also, in retrospect, I wonder whether Jamie will switch between adventures on the road and reflections of home in the same way that I didn’t entirely appreciate Diski doing in last month’s book.

We’ll see. It’s a region I know little of, and one we should all try to become better acquainted with given events in world politics. I’m just one chapter in – a new introduction written by the author in 2001 to mark the re-publication of her book. Jamie is a warm, amiable writer so far and I think she’ll be good company.

As usual, I’ll report back once I’ve finished. And watch out on Twitter for my observations as I go.