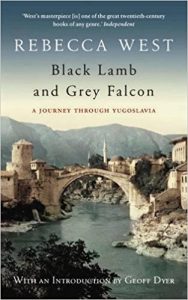 I’d been enormously looking forward to September’s title in my year-long quest to read only female-authored travel writing. Not, shamefully, that I had heard of it when I conceived the idea, but Black Lamb and Grey Falcon: A Journey Through Yugoslavia by Rebecca West is held up as an absolute classic of travel writing by those who manifestly know more than I about the genre and women’s contributions to it.

Throughout this mission I’ve tried not to reference my own travel writing too much for obvious reasons. However I will do so here because my interest in the countries once known as Yugoslavia is outlined in my first book, so I shall not bother repeating myself here (and in case you think I’m shoehorning a mention of it into a review purely for personal gain, then worry not – sign up to my newsletter and you can get an ebook copy of it for free).

Suffice to say, therefore, that discovering the existence of this book meant it was an absolute certainty to make my shortlist. I was recommended the book on Twitter, though sadly the tweet has now been deleted. Others have mentioned it however, and by a pleasant coincidence I saw an article about it just a few weeks before purchasing it for August’s read.

It was a piece in the Los Angeles Review of Books lamenting the fact that BL&GF (as I shall henceforth call it here) passed its 75th anniversary without major note, and that various other key overviews of travel writing have overlooked it. It’s a passionate defence of the book, the reading of which increased my keenness to get stuck into BL&GF for myself.

But then my heart sank when the article went on to say:

Black Lamb and Grey Falcon is, by every measure, an extraordinary work. The product of two months of travel in the Balkans and five solid years of writing, it was released in two volumes after being published serially in The New Yorker. At 1,100 pages and more than a million words, it is longer than the Old Testament. “[H]ardly anyone will read [it] by reason of its length,” West admitted.

And I’ve committed to reading it in a month!

Well, I can tell you this straight off: that’s not going to happen. I am not going to finish BL&GF by the end of this month. That’s not to say I’m not going to finish it. I will certainly try to. But perhaps later this year, or into next year. I’ll certainly aim to continue the meter of this project with at least a “review so far” by the end of August, however much I get through those thousand and more pages. And I can come back again next year or whenever with an update to that when I finish the book.

The second thing that stood out in that paragraph above from the article was that it was “the product of two months of travel in the Balkans and five solid years of writing”. That set off alarm bells. There are two reasons why two months of travel require a five year write up. One is that West is a poor writer, if not poor in terms of the end result’s quality (it’s reputation would contradict that) but poor at the craft; or at least a slow worker. Would this show through in terms of a sluggish approach, a tired pace, the pains of a struggling writer bleeding through into tortured prose by someone who clearly wished she’d not started the undertaking? The other reason, I surmised, was that she was going to cram the book full of endless background history (exactly what I criticised Rose Macaulay for in June) or irrelevant, self-indulgent tangents (which Jenny Diski delivered in April).

I’ve read both my version’s introduction by Geoff Dyer and the author’s own preface so far, and the answer, I suspect, might be a little bit of both – albeit not to such disappointing extents as the above reviews.

Dyer’s introduction, by the way, is useful to a degree – his enthusiasm for BL&GF is infectious and his praise heartfelt, though I am not entirely convinced he does much more other than demonstrate how well-read he is. Perhaps that’s just my frustration at having a project about reading female writers polluted by the writing of a man, but I do wonder whether if a woman’s book is a classic then that status should be self-evident rather than requiring to be mansplained.

Meanwhile West’s preface is long, perhaps unnecessarily so, but certainly persuasive in terms of demonstrating her mastery of words, her intelligence, and her interest in European politics at, in the 1930s, a time of great uncertainty.

I am sure I will find the book a bit tiresome at times, and I am unpersuaded that West’s obious skill, passion and creativity will be enough to steer me through such a heavy tome, even one about an area I am so interested in myself.

Such low expectations on my part are, I hope, a good thing: anything better than boredom and disappointment at West’s extensive narrative will feel like a triumph.

I’ll report back at the end of the month – however far through it I get.