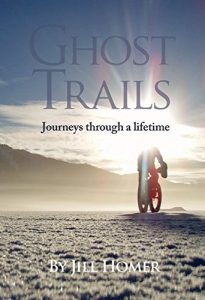 I almost didn’t put Jill Homer’s Ghost Trails: Journeys Through A Lifetime on my reading list.

I had said, when originally appealing for suggestions for my mission, that I wasn’t so keen on books about physical endurance where the internal battle overshadows any sense of the place the author is battling through.

But when the recommendation came through on Twitter, I did think about it carefully.

@simonvarwell @dr_bumble also- Jill Homer's Ghost Trails, about riding the Iditarod (and what brought her there)

For starters, I figured that in a reading list where the whole purpose was to push my horizons, there was no harm in following a recommendation of something that didn’t quite fit my tastes. And secondly, the book came with consistently positive reviews on Amazon (much more positive than one or two other titles I rejected in its favour) – yet so few reviews in number that I wondered whether this was a book that hadn’t quite received the audience it deserved.

Thirdly, once I thought about it, it did sound like an amazing journey that the author had undertaken. Ghost Trails is written by American adventurer Jill Homer (and hey, I’ve just realised my quest hasn’t, with the exception of January’s compilation, taken me beyond British and Irish authors. But more on that line of thinking, I suspect, in next month’s preview). The book charts Homer’s experience of doing a winter cycle race along part of the Iditarod Trail, a historic route through Alaska of which I confess I have never heard. Anything in Alaska in winter sounds like an extraordinary challenge, but a 350 mile bicycle ride seems almost too absurd to even think about. So the author is clearly made of tough stuff, and has quite some story to tell.

As I picked up my book at the start of this month (just 99p on the Kindle, rather satisfyingly), I did wonder whether I had made a mistake in choosing it. Much as Alaska sounds like an incredible place, it’s not high up my travel wish list. And as the introductory blurb made clear, this was a story not only about the physical journey Homer takes but also the inward struggle she faces as she reflects on her life so far. I feared that with Murphy in February I’d got the epic cycle covered, and with Diski in April I had more than my fill of deep introspection.

Yet when I got stuck in, my concerns dissipated. The opening thrusts the reader straight into the action, Homer’s brilliant prose helping at once to appreciate both the terrible physical and emotional toil the cycle is taking and also the astonishing beauty of this strange, white landscape she finds herself in. Then, following her introduction, a flashback to her younger days draws us into her personality and explains to us her motivations. One paragraph did this especially powerfully that I tweeted it. Click on the image of text in the tweet below:

That paragraph packed so much in – about identity, friendship, growing up, the contrast between formal education and carefree wanderlust, and the power that the desire to travel can have over people. It was a superb piece of writing that left me as the reader in no doubt as to what makes the author tick and why she undertook this adventure – something that not all travel writers, and certainly not all I’ve read thus far in this year’s mission – have been able to do so soon and so effectively.

That sets me up for a much more positive approach to the book. I will go into the rest of it expecting a brilliant tale of adventure but also compelling clarity as to why the author has undertaken it. In travel writing getting a sense of the why as much as the where is the key to convincing the reader, and I feel Homer has done this for me already in just a few early pages of Ghost Trails.

I think I am going to very much enjoy reading it this month.